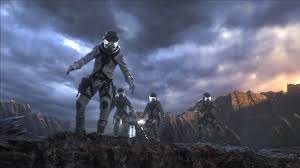 *** out of 4
If you have read any of my other reviews you’d know that I’m a comic book fan.  I had a huge comic book collection until my mother decided to clean up my room but let’s not go into that again. The original Fantastic Four movie that came out in 2005 and Fantastic Four: Rise of the Silver Surfer in 2007 were enjoyable films. They were based on the original comic book and they had a lot of special effects, humor, and camraderie between the characters, a likable evil villain and all the things that go into making a movie out of a comic book.

This version is completely different. Remove the humor, the banter, the evil villain, and the cartoon style and what you get is a more dramatic intense film which was unexpected.  It removed the adult cast and replaced them with kids in grade school and followed them through college.  Some may call it a prequel but it’s just a different version of the story from Marvel.  More dark, more intense, more dramatic and definitely more interesting. Don’t get me wrong this is still a great popcorn movie. I know I bought a date with me and even though we had just eaten dinner she was still going strong at the popcorn.

I like the fact that they completely changed up the story from the original movie. Victor VonDoom was not a successful billionaire, they never went into space, and they were not bombarded by a strange lethal comet and didn’t follow the story of the original. This was a totally different take on the four characters who ended up with strange powers from a distant world and the events that followed them. I was not familiar with this new story so for me I found it intriguing all the way through the film.  Strong performances were delivered by the young cast.  Miles Teller (Whiplash, Divergent) as Reed Richards (Mr. Fantastic), Kate Mara (Shooter, Iron Man 2) as Sue Storm (The Invisible Girl), Michael B. Jordan (Fruitvale Station, That Awkward Moment) as Johnny Storm (The Human Torch), Jamie Bell (The Adventures of Tintin, Jumper) as Ben Grimm/The Thing and Tobu Kebbell (Wrath of the Titans, Dawn of the Planet of the Apes) as Victor VonDoom.

I predict that this film is going to be a summer hit and will spawn many more episodes. It touches the human condition of reaching out for help from any source that will provide it regardless of their overall intentions.  Go see this film.  The version I saw was not in 3-D but it didn’t hurt the film one bit, for this movie is more about the story than the action. Overall, to be blunt, I thought that it was FANTASTIC.

Spooler Alert:  This movie does not have any teaser trailers at the end.  So if you want to skip the credits listing 150,000 people who worked on the film, be my guest.