Up until now, there has not been a logical link between the Scottish actor Ewan McGregor and the veteran Canadian actor Christopher Plummer. Both have had strong acting careers in a mix of big-budget and smaller indie projects and both have been generally praised for their contributions in even mediocre films. However, these two actors, with their different career resumes and acting styles, fully compliment each other in the new indie film BEGINNERS, an emotional drama that had its world premiere at the Toronto International Film Festival and now has begun its theatrical journey in the United States via distributor Focus Features. 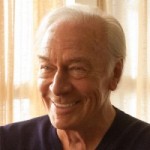 Christopher Plummer has long been one of the most respected actors in both theatre and film. Raised in Montreal, he began his professional career on stage and radio, eventually expanding to the theater on Broadway, in Canada, and on London’s West End, winning two Tony Awards, for the musical CYRANO and for the play BARRYMORE. He made his film debut in director Sidney Lumet’s STAGE STRUCK (1958) opposite Henry Fonda and Susan Strasberg, but he is perhaps best remembered for his role as Colonel Von Trapp, the father of the singing children’s group, in the mega-hit THE SOUND OF MUSIC (1965). . Other notable films from his 50 plus film career include THE MAN WHO WOULD BE KING,  INSIDE DAISY CLOVER, MURDER BY DECREE, SOMEWHERE IN TIME, TWELVE MONKEYS, A BEAUTIFUL MIND, SYRIANA, THE NEW WORLD and THE INSIDER, for which  he earned awards from the National Society of Film Critics and the Los Angeles and Boston Film Critics Association for  Best Supporting Actor. In 2009, he received an Academy Award nomination for his role as Leo Tolstoy in the historical drama THE LAST STATION. He next stars with Daniel Craig and Rooney Mara in David Fincher’s anticipated THE GIRL WITH THE DRAGON TATTOO, due out in December. At age 78, he continues to work on both the stage, television and in films with the ferocity of a man half his age. Speculation is already building about a possible Oscar nod for his performance in BEGINNERS.

Ewan McGregor was born in Crieff, Scotland and studied at London’s Guildhall School of Music and Drama. He first was noticed on television for his role in the Dennis Potter-scripted musical comedy miniseries LIPSTICK ON YOUR COLLAR. He made his feature debut in fellow Scotsman Bill Forsyth’s BEING HUMAN but had his breakthrough with his starring role in Danny Boyle’s SHALLOW GRAVE. Their second film together, the cult classic TRAINSPOTTING, became an international sensation. His film resume is an eclectic mix of historical adaptations, contemporary dramas, musicals and arthouse experiementation, including such well received films as THE PILLOW BOOK, EMMA, BRASSED OFF, A LIFE LESS ORDINARY, VELVET GOLDMINE, LITTLE VOICE, BLACK HAWK DOWN, NORA, YOUNG ADAM, BIG FISH and George Lucas’ Star Wars film THE PHANTOM MENACE and REVENGE OF THE SETH. An accomplished musician with his own rock band, McGregor showed off his singing chops in MOULIN ROUGE, director Baz Luhrmann’s kaleidoscopic musical, which won McGregor a Golden Globe nomination and a London Film Critics Circle Award. Last year, he scored in two diverse projects, as Jim Carrey’s gay lover in I LOVE YOU PHILLIP MORRIS and in the title role in Roman Polanski’s THE GHOST WRITER, for which he won the European Film Award for Best Actor. His strong reviews for BEGINNERS are generating talk of a long-delayed Oscar nomination. 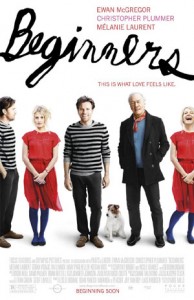 BEGINNERS is the sophomore effort of American director Mike Mills, who made an assured debut in 2005 with the festival hit THUMBSUCKER. Mills juggles two storylines that, in the best filmic tradition, eventually intertwine, and in the process, becomes the catalyst for vital life lessons. Ewan McGregor toplines as Oliver, a rootless cartoonist who lives mostly in his head and connects with the world through his ironic illustrations. Two recent major events in his life have turned his rather solitary world on its head and force the opening of his heart.

Juggling two chronologies, the first follows the slow-burning deterioration of Oliver’s father, who is dying of lung cancer. Sobering as that is, it also is accompanied with the news that his father, at the tender age of 75, has decided to come out as gay. His newly found gay freedom (as showcased in his new wardrobe, new boyfriend and a new outlook on life) provides some of the comic helium in the film. The fact that the father is played by Christopher Plummer, one of Canada’s great acting treasures, gives the character a depth and solidity that would be lost with a lesser presence.

Oliver is rather comfortable with this news and the film offers telling flashbacks to his early family life, when his museum curator father was mainly absent and he spent time with his emotionally complex and seemingly damaged mother. He begins to understand that his father has been gay all along but like many of his generation, attempted to set up house with a woman and have a family, although the emotional investment was never fully there.  Understanding the falsity at the heart of his parents’ marriage has made Oliver somewhat of a loser at love. This is put to the test when he meets a dazzling and beautiful French actress, who is in Los Angeles for just a brief time on a film shoot.  As played by Melanie Laurent (the blond Jewish movie theater owner in Quentin Tarantino’s INGLORIOUS BASTERDS), she is all quirky in an endearing European sense and sexually ripe…..a perfect compliment to Oliver’s intense and brooding personality.

McGregor and Laurent have terrific on-screen chemistry and their budding romance is contrasted nicely with the inherent dignity of Plummer’s performance. In a scenario that could have seemed contrived with lesser talents involved, the father’s late-in-life determination to live life honestly is the valuable legacy that he is finally able to leave to the son that he has somewhat neglected in the past. By motivating him to surpass his self-prescribed limitations, he has taught his son (and us, by extension) that life demands our courage and strength and that honesty breeds its own rewards. The courage to live one’s own truth is the potent theme of this humanistic and compelling drama.

With its smart script that never goes for the easy laugh or the ready tear, BEGINNERS is ultimately a valentine to the art of acting and the artistic ambitions of its talented writer/director. As it moves beyond its initial opening in New York and Los Angeles, the film will face certain challenges in smaller markets, but strong reviews and the quality of its acting and script should make it one of the more provocative movies of the year. For more information on the film and to view a trailer, visit:  http://focusfeatures.com/film/beginners/