New York audiences interested in a uniquely gay European point of view have several films to sample at the NewFest, New York’s key gay and lesbian film festival event. The Festival obviously values this European perspective, having chosen a UK film as its Opening Night attraction. MR. RIGHT, written and directed by Jacqui Morris, was an audience pleaser as it unfolded its interlocking stories of a group of gay men and their “fag hag” compatriot in the gay-centric Soho neighborhood of London.

In Richard Laxton’s AN ENGLISHMAN IN NEW YORK, Brit actor John Hurt reprises his most famous role as raconteur Quentin Crisp, in an entertaining portrait of the gay icon as he takes residence in New York City for the final chapter of his oh-so-colorful life. In GREEK PETE, UK director Andrew Haigh mixes documentary realism with fictional recreations in a sexually explicit look at London male escorts. Working class youth in the London slums also face difficult struggles with sexual and identity issues in Simon Pearce’s arresting SHANK.

Germany is represented by three films in the Festival. In GHOSTED, veteran director Monika Treut offers a haunting love story that crosses ethnicities and continents. When a lesbian photographer travels from her native Hamburg to Taipei, she encounters a sexy female journalist who has a strange bond with the Taiwanese girlfriend who died under mysterious circumstances. Incorporating the Asian penchant for ghost stories with the bluntness of German queer cinema, Treut’s film was celebrated at its world premiere at the Berlin Film Festival this winter. Also from Germany comes LIGHT GRADIENT, an erotic road movie about a male couple on a scenic bike trip through the German countryside, directed by Jan Kruger. In the documentary THE GOOD AMERICAN, queer director Jochen Hick profiles Tom Weise, the controversial founder of rentboy.com and the producer of the HustlaBall, a celebration of the male hustler lifestyle.

Two arresting French films are having their US Premieres at the event. GIVE ME YOUR HAND by Pascal-Alex Vincent is a strong debut feature starring two identical twin brothers who trek across Spain to attend their mother’s funeral. As their adventure unfolds, complex truths about family secrets and sexual identity dramatically come to the surface. In Alan Tasma’s OUT OF THE BLUE, a middle aged-mother and wife makes the bold move of leaving her husband and looking to “find herself”. That she ends in the bed of a free-spirited dancer is not so surprising in this heartfelt lesbian drama.

Spain offers two contributions at this year’s event. CHICA BUSCA CHICA by Sonia Sebastian is a feature-length film version of the popular web series that finally makes it to the big screen. A cross between the campy melodramas of Pedro Almodovar and the sexual roundelay of the cable series THE L WORD, the film features luscious ladies hopping in and out of each other’s lives and beds with carefree abandon. The tone is more serious in director Andres Rubio’s CAMPILLO, YES I DO, a dcomentary on the hot button issue of gay marriage. The film tells the story of a small Spanish village whose mayor was the first to officiate at same sex marriages after the Spanish Parliament passed the law in 2005 giving gay couples the right to tie the knot. 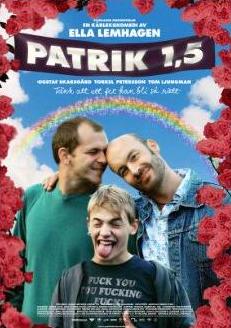 One of the charmers in this year’s Festival was one of the big hits at the Berlin Film Festival earlier this year. PATRIK AGE 1.5 by Swedish director Ella Lemhagen offers a kind of post-gay marriage drama. Husbands Sven and Goran live in picture-perfect suburbia and their lives are pretty perfect, except for their longing for a child to raise. After a string of disappointments, the adoption agency calls to let them know that they have an infant, aged 1.5 years, available. When it turns out that a clerical error has misrepresented the age of the boy (he is actually 15 years old, and quite a rebellious handful), their ordered life gets turned on its head. As a portrait of the challenges of gay parenting, the film is rueful, affecting and very human.

New York audiences have much to appreciate in these choice European films with their unique viewpoints and stories. For more information on the full program of Newfest, visit their website: http://www.newfest.org/