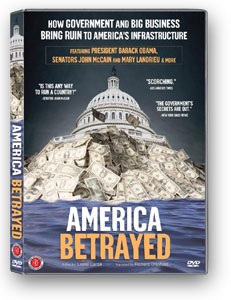 The U.S. government will soon wrap up its defense against a landmark lawsuit, accusing its Army Corps of Engineers of failing to build an adequate infrastructure to protect the residents of New Orleans from catastrophic flooding.

As more than 50 lawyers from 20 law firms around the country represent the plaintiffs in this groundbreaking case, a federal judge will rule by the end of August as to whether or not the government can be held liable for the devastation of New Orleans.

The country’s failing infrastructure, the alleged corruption associated with projects funded in the U.S., and the historic reasons for governmental immunity from prosecution are all the subject of First Run Feature’s new DVD release AMERICA BETRAYED, written and directed by longtime broadcast journalist Leslie Cardé.

“This documentary will give you a new view of your government. See it!“- Fox News Radio

“With America Betrayed the government’s secrets are out.” – New York Daily News 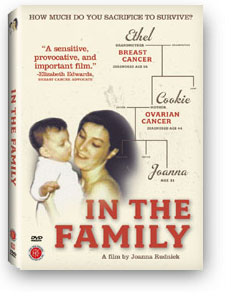 The New York Times recently reported that the ACLU has filed a case against Myriad Genetics and the U.S. Patent Office challenging the patents on BRCA1 and 2, the human genes associated with breast and ovarian cancer.

When filmmaker Joanna Rudnick heard of the challenge she was in between a bi-annual MRI screening for breast cancer and packing to attend the Facing Our Risk of Cancer Empowered (FORCE) conference in Orlando, celebrating 10-years of advocacy around issues affecting the BRCA mutation community.

She thought how fitting it was to find out that the commercial ownership of the two genes that impact this population so disproportionately—in terms of their extremely high chances of developing breast and ovarian cancer—was being called into question on the eve of the conference.

Joanna shares her story of testing positive for the BRCA1 mutation in the documentary IN THE FAMILY, which tells of the life saving, yet excruciating consequences of learning that one has this mutation.

First nationally broadcast on PBS’s P.O.V and now on DVD, it is the first film to publicly challenge the patents, and, as of now, the only interview on the subject with Myriad Founder and CSO Dr. Mark Skolnick.

The stories told in the film, which raise a concern that the Myriad patents are limiting the ability to discover new breakthroughs in the prevention and treatment of BRCA-related cancers—let alone the development of a better diagnostic test—led filmmakers to Myriad’s headquarters in Salt Lake City, Utah. After an extensive tour of the lab, they sat down with the Founder and Chief Scientific Officer of Myriad, Dr. Mark Skolnick, whose answers surrounding the ethics and detrimental consequences of gene patenting were unsatisfying, leaving more questions than answers and leading to where we are now with the ACLU challenge.