Wroclaw, Poland——Canada’s reputation often is overwhelmed by the sheer size and influence of its neighbor to the south. While Canadians may seem interchangeable with Americans to outsiders, it is very far from the truth. The differences are particularly clear in the Canadian film industry, where active governmental subsidy systems have nurtured the careers of such film artists as David Cronenberg, Atom Egoyan, Norman Jewison, Robert Lepage, and Guy Maddin, who has been given a full retrospective here. 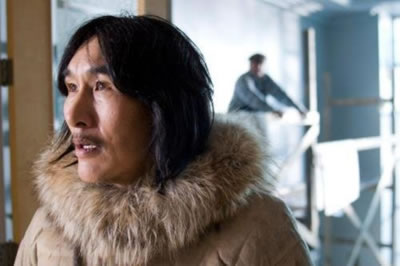 Kino Kanady: Cinema of Canada at the Era New Horizons International Film Festival offers a survey of the best Canadian films of the new millennium. “Stardom” (2000) from Oscar winning director Denys Arcand is a biting satire on the jet-setting world of international modeling. “Life Without Death” (2000) is director/cinematographer Frank Cole’s fascinating chronicle of his trek across the beautiful but deadly Sahara Desert. “Imitations of Life” (2003) is writer/director Mike Hoolboom’s aesthetic “found footage” film experiment. “The Corporation” (2003) is  a devilish social critique of corporate greed influenced by the writings of economist/philosopher Noam Chomsky, from the director team of Mark Achbar and Jennifer Abbott.

A unique mini-genre that has emerged in the last few years is the exploration of the native Inuit culture. In 2001, director Zacharias Kunuk became an international sensation with “The Fast Runner”, a beautifully shot drama that was conceived and performed by Inuit actors. The film’s lead Natar Ungalaaq also stars as the Inuit hunter who develops tuberculosis in Benoit Pilon’s celebrated “The Necessities of Life” (2008). The Inuit experience is also explored in rich detail in “Before Tomorrow” (2008), co-directed by Marie-Helene Cousineau and Madeline Piuluq Ivatu.

Two cult directors are highlighted. Writer/director David Cote is represented by “All That She Wants”, a rural gothic tale, and “Carcasses”, a documentary/fiction mix about a geriatric car collector. Bruce McDonald’s quirky contributions include “The Tracey Fragments”, a kaleidoscopic portrait of a troubled teenager starring Ellen Page of “Juno” fame and “Pontypool”, a zombie art film. Canada….it’s not Hollywood North anymore.