Say bienvenue to the latest heartthrob from France……actor Jean Dujardin does not utter a single word of dialogue in the contemporary silent film THE ARTIST, but he is already inspiring fan clubs around the world, as well as serious buzz about Golden Globe and Oscar nominations later this year. Following his win as Best Actor at the Cannes Film Festival, this has been a whirlwind six months for the French thespian, whose film opened theatrically in North America this past week via The Weinstein Company. If Harvey Weinstein has anything to say about it, Dujardin will become only the second actor in Oscar history to win the Best Actor trophy in a foreign language film (following Italian actor Robert Benigni’s surprise win for LIFE IS BEAUTIFUL in 1997.)

Born in a Parisian suburb in 1972, Dujardin is the youngest of four brothers who grew up in a middle-class bourgeois family. .He studied drawing and worked as a locksmith to make ends meet, but decided to take up acting at the age of 24, performing at bars and cabarets with a French style of stand-up comedy mixed with character-driven comic spoofs. In 1998, his performance as one of the members of a parody boy-band called Nous C Nous (Us Is Us) made his reputation in his native France as a kind of Saturday Night Live comic caricature. An ever bigger French television sensation was his regular appearance in a six minute tv spot titled UN GARS, UNE FILLE, where he starred with is real life wife Alexandra Lamy as a couple who deal with the humdrum aspects of married life. In this series, the comic actor refined his cheeky sense of humor and his expressive rubber face became familiar to millions of viewers. 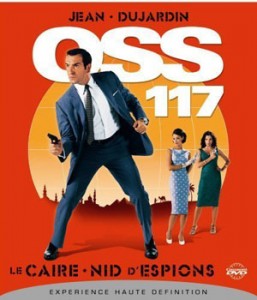 His film career also began to take off. In 2005, he starred in BRICE DE NICE (The Brice Man), a wicked comedy about an arrogant surfer which was the top box office film in France of that year. He then followed up that success with a series of films in which he starred as a clumsy secret agent. OSS 117, the first of a series of spoofs inspired by French spy novels, earned him a Best Actor nomination at the Cesar Awards, the French equivalent of the Oscars. He now had the clout to stretch beyond comic roles, giving highly praised performances in the films 99 FRANCS (2007) by Jan Kounen and CLINK OF ICE (2010) by Bertrand Blier.

The director of the OSS 117 spy spoofs was Michel Hazanavicius, who had an audacious idea to shoot a contemporary silent film about the heyday of 1920s Hollywood. He turned to his friend Dujardin, who at first rejected the idea as ridiculous and possibly career suicide. However, the strong script that chronicles the fall from grace of a Hollywood silent film star who cannot adjust to the new era of talkies, eventually seduced the actor. The film, shot in Los Angeles in black and white, has echoes of the musical SINGING IN THE RAIN (also set in the period when talkies devastated silent films) and A STAR IS BORN, the chronicle of the differing careers of two actors in Hollywood…..the veteran whose career is self-destructing and the ingénue who career is on the rise. 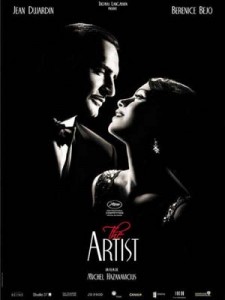 THE ARTIST is also bucking tradition by being shown in the 1:33 aspect ratio that was the format of silent films, not the widescreen ratio prevalent today. All in all, it is an audacious project that was far from a sure bet when it made its world premiere in Cannes. However, the buzz there has been replayed at every film festival that the film has played in the past six months and has put its star on the track to international stardom……all without uttering a single word. For this film, he has been nominated for the Best Actor prize at the European Film Awards, which will be presented in Berlin on December 3. THE ARTIST has also been an audience favorite, winning Audience Awards at the Hamptons, Hollywood and San Sebastian film festivals. The film was just named Best Picture of the Year by the New York Film Critics Circle, and also garnered a Best Director award for Michel Hazanavicius. It also was a surprise nominee for multiple Independent Film Spirit Awards, which will be given out in Los Angeles the night before the big Oscar ceremony in February. For the 40 year old Jean Dujardin, 2011 has become the perfect year, and it just make get sweeter as we move full throttle into awards season.