Karl Glusman has a future in Hollywood.

I did not see LOVE in 3D. That would have been some experience since the film begins with a close-up of Murphy (Karl Glusman) ejaculating.

No one considers Lucian Freud’s nudes of real bodied women – most of his models were older women with fleshy bodies and legs splayed apart across his canvases, such as “Standing by the Rags” and “Naked Portrait 1972-3”- pornography.

Is this very expensive pornography masquerading as art? Were rich art investors hoodwinked by Koons? Are these sculptures gracing living room walls? 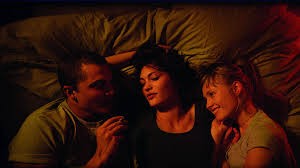 Finally, an actress is not the only one required to be nude in a sex scene. Conventional Hollywood sex scenes have the actor grabbing a sheet as he exits the bed, modestly covering his genitals.

The exposed penis is the last taboo.

“An actor doesn’t do nude scenes. An actor plays an event and tells a story.” Harvey Keitel

LOVE shows the kind of sex you should be having, have had, or should want to have. It is not anti-erotic. It is an exposé.

In 2015, the star of the phenomenal TV hit, How to Get Away With Murder, Viola Davis, spoke about the series sex scenes. She said: “People have sex onscreen, and, now, we know people don’t have sex like that.”

American aspiring filmmaker, Murphy (Karl Glusman) is living in Paris with Omi (Klara Kristin), and his young son. Murphy is depressed and very angry. He tells us he is not in love with Omi. He didn’t want a child with her. He still longs for his former girlfriend, artist Electra (Aomi Muyock). They were deeply in love.

What happened? Why is he with Omi and not Electra? One night two years ago, Murphy asked Electra what was her sexual fantasy. Electra tells him she would like another woman to join them. Conveniently, young, attractive Omi has just moved into the apartment next to theirs, so they go about seducing her. 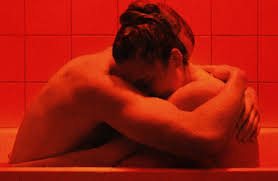 Electra is provoking Murphy and challenging him to be sexually adventurous.

One should be mindful of what may happen if the third person you choose is younger, sexier, prettier (or has better muscle definition), or more adventurous than you – and lives next door.

Murphy’s condom breaks and Omi happily tells Murphy she is pregnant. Refusing to get an abortion, Omi has betrayed Electra and now has replaced her.
Electra is devastated and leaves Murphy. It is Electra who has sexual boundaries.

Two years have passed and Noé goes back and forth in time as Murphy recalls their relationship and attempts to find Electra. Electra’s mother is worried that she has committed suicide.

We hear Murphy’s inner thoughts. While much has been written about there being only a story outline and no actual screenplay; the three principals react in a naturalistic way as scenes unfold. However, it is clear that Murphy’s inner dialogue was carefully crafted and, like all our thoughts, without censure.

Rarely does what we say out loud truthfully express our feelings.

“The great question that has never been answered, and which I have not yet been able to answer, despite my thirty years of research into the feminine soul, is ‘What does a woman want?’” Sigmund Freud

I would have told Dr. Freud, “A woman wants to be desired.”

Murphy’s obsession with Electra – intensified by his guilt and her leaving – creates “madness” in him. He is “madly” in love. Women want a man to be blind to their imperfections and bound to them no matter their shortcomings. They can lie, cheat and steal and make a man miserable and he will still be irrationally and passionately in love. While Electra cannot forgive Murphy having a child with Omi, he would forgive her if it had been her indiscretion.

I recently watched Noé’s I STAND ALONE (1998). The theme of I STAND ALONE also uses the inner voice of the protagonist. He is a mean, ugly man who hates everyone and everything. He only way he can talk to anyone is through cursing at them. Then there is Noé’s controversial IRRÉVERSIBLE (2002), in its depiction of rape. While LOVE may seem “irresistibly” different, for me, driving these three Noé films can be simplified to one ideological stand (and happens to be at the apex of Buddha’s teachings): all life is suffering [even love].

And finally, for levity, let’s quote U.S. Supreme Court Justice Porter Stewart. When the Supreme Court was trying to define pornography, Justice Stewart said: “I know it when I see it.”

We value constructive comments and criticisms from our readers. All comments are moderated.  We do not allow comments containing offensive, obscene or sexual language. Also prohibited are insulting, threatening or vicious comments. Anyone failing to follow this policy will have their comments removed and will face a ban from making future comments on articles.