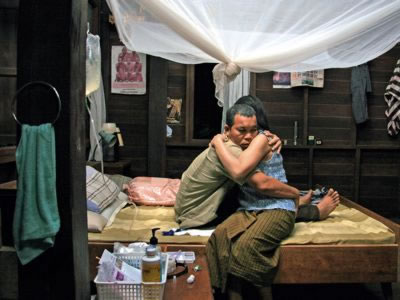 New York City, a hotbed of film activity during the entire year, is not holding its breath while many of its film professionals are up here schmoozing in Toronto (myself included). The Film Department of the Museum of Modern Art is offering a superb survey of the best of new Asian cinema for local audiences who have not made the trek north.

ContemporAsian begins tomorrow and runs through September 15 at the Roy and Niuta Titus Theaters at MoMA. This season’s opening program features a rare selection of recent shorts made by four of Asian cinema’s most renowned directors, all of whom have received only limited visibility in the U.S., despite worldwide critical acclaim. Apichatpong Weerasethakul’s A Letter to Uncle Boonmee (2009, Thailand/Great Britain/Germany), Tsai Ming-Liang’sMadam Butterfly (2008, Italy/Taiwan/France), Jia Zhangke’s Heshang aiqing (Cry Me a River) (2008, China/Spain/France), and Lost in the Mountains(2009, South Korea), directed by Hong Sang-soo. These short films distill the particular styles and personal expression of their directors’ feature films, while using the short form to exemplary effect.

Of supreme interest is the Apichatpong Weerasethakul short film, which the director expanded into a feature film that won the Palme d’Or at theCannes Film Festival this year. The original short film distills the themes of mortality and continuity that are in full flower in the feature version….which is sure to be one of the big international films of the year (and a frontrunner for the Oscar for Best Foreign Film……you heard it here first).

ContemporAsian is organized by Jytte Jensen, Curator, Department of Film, The Museum of Modern Art, and William Phuan, independent curator, with the participation of the San Francisco International Asian American Film Festival. For more information on this and other MoMA film programs, log on to:www.moma.org