As the story begins to unfold in the Iranian family drama HERE WITHOUT ME, which is having its international premiere at the Montreal World Film Festival this week, there are familiar resonances of another celebrated drama from another time (the 1940s) and another place (the American city of St. Louis). As unlikely as it may sound, writer/director Bahram Tavakoli has drawn on the Tennessee Williams classic THE GLASS MENAGERIE to tell his delicate tale of a pushy mother, a dissatisfied son and the lame girl whose attachment to her menagerie of glass figures provides the metaphor for lives that are so delicate they can break at a moment’s notice. 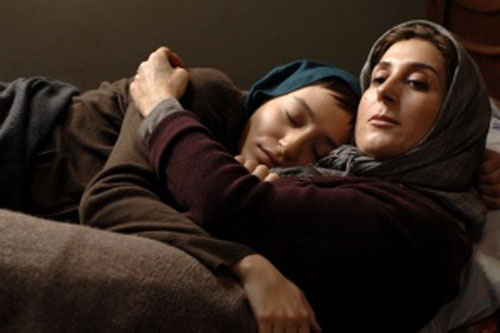 Writer/director Tavakoli is very blatant about his source material, giving the play and its author an upfront credit. This time, the setting is modern-day Teheran, where single mother Farideh spends long hours in a food processing plants, while dreaming of ways that she can marry off her delicate flower of a daughter, a shy girl with a brace on her leg who lives in her own dream world of fantasy, most centered on the luminous collection of glass animals she has collected over the years. Farideh has sharpest words for her son Ehsan, a young man who escapes into his film magazines and to the cinema itself to escape his stifling life as a clerk in a basement warehouse and who dreams of running away to start his own life. Farideh pushes her son to invite a male co-worker from the warehouse to dinner, as a way of enticing him to possibly propose to her socially awkward daughter. As in the Tennessee Williams story, she proceeds to upgrade their shabby apartment and devise a menu that will not only distract the young man into not seeing the daughter’s physical flaws, but will rekindle her own lost youth, when she was entertained by many potential suitors (but wrongly choose the children’s unstable father).

The characters are all so hopelessly lost in their own dreams that the plain realities and hopelessness of the situation eludes them. The son’s friend, while sympathetic, already is engaged to someone else. The daughter, who secretly has a crush on him from previous visits. when he visited the brother while she stayed sequestered in her own room, cannot handle the emotional rejection. The mother lashes out at her son, who finally finds the courage to leave the crippling situation, although it means abandoning his delicate sister. The tale, the first big hit for Tennessee Williams, was unabashedly autobiographical (although with a heightened poetry that was emblematic to his entire oeuvre) but also remarkably universal. Since its debut on Broadway in 1943, the play has been performed all over the world, speaking to different cultures with its potent mix of the harsh realities of life leavened by the hopefulness of a better future. HERE WITHOUT ME adds some melodramatic touches that are not in keeping with the original, but finds its own original voice in the struggles of the working poor in Iran, who valiantly hold on to their dignity and their dreams despite the crushing boredom of just staying alive. The film, with its strong performances by the leads, particularly Fatemeh Motamed-Arya as the clinging mother, should resonate nicely with Western audiences. It is true to its own period and cultural specificity, while also being a universal story that has just the faintest hint of Southern magnolia in the air.