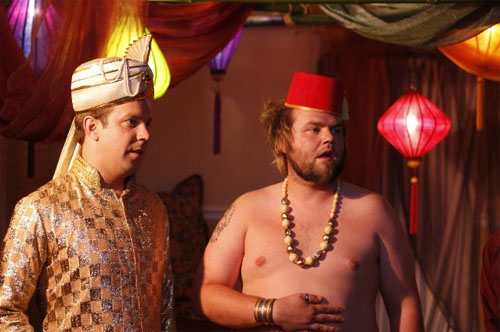 Alex Gregory and Peter Huyck, first-time directors and feature film writers with background in television comedy, manage to take the antiquated concept and give it comedic roots while staying true to the idea of friendship.The main character is Eric, played by Saturday Night Live’s class clown Jason Sudeikis, but the film is very much an ensemble piece. Jason Sudeikis has been working his way up to a lead role and he carries this film with ease and superb timing. Tyler Labine (in the current RISE OF THE PLANET OF THE APES) is well cast as a (perhaps) dim-witted yet thoughtful Mike who plans the party with Eric. Other notable cast members include such spunky supporting performaers as Martin Starr (NBC’s Freaks & Geeks, Showtime’s Party Down), Will Forte (MacGruber, SNL) and Lucy Punch. It more than captures the anarchic spirit of men and women in their 30s, afraid of giving up on their earlier excesses but realizing that they are getting slightly old in the tooth to have their cake and eat it too. The film is funny, entertaining and has some definite R-Rated scenes. All in all, it is a superior capper to a summer of mostly lame buddy comedies, with its sharp script and diverting performances raising the bar. Does the orgy “come off”? Well, we don’t want to spoil it for you…….