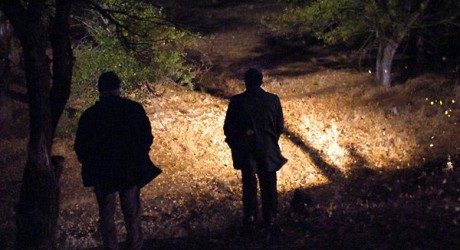 It is hard not to notice America’s current obsession with the “crime procedural”, television programs such as NCIS, CSI and other modifications of the form. In these crime dramas, the emphasis is on the work of the pathologists and investigators, who examine crime scenes and victims to piece together a scenario that will lead police to the possible perpetrators (perps in television crime lingo). That such a successful American format is able to connect so effortlessly within the somewhat exotic culture of Turkey is a testament to the efficiency and talent of the makers of the film ONCE UPON A TIME IN ANATOLIA. Winner of the Grand Jury Prize at the Cannes Film Festival, the film, which also premiered this week at the New York Film Festival, is an astonishing milestone in contemporary Turkish cinema and another masterpiece by the country’s most prodigious talent, Nuri Bilge Ceylan.

Most of the film takes place over one long November night in the forbidding atmosphere of the mountains of the Anatolia region of northern Turkey….a landscape that reminds one of the moon or some other desolate planet. The film follows a convoy of police, military and government officials as they move from place to place trying to identify the location of a grisly murder. With the alleged “perps” in the back seat, the search seems both an exercise in futility as well as a necessary odyssey to bring to unravel a heinous crime and bring justice to the victim’s family. With the killers not exactly sure where they have placed the body, the trek in this desolate landscape builds up the tension amidst lively conversation that sometimes negates the barriers between officials and their captives.

The film moves at a slow and deliberate pace, not conceding much but being remarkably true to the ancient ambience of a land where things have not changed substantially in a millennium. Conversations between the characters often seem unfocused or arbitrary, but there are revelations that emerge that are like golden nuggets hidden in a landscape of mud. In this sense, Ceylan brings a “you-are-there” quality to the proceedings, while mainly sympathizing with a doctor who serves as a kind of stand-in for us, trying to piece together the tidbits of conflicting information and yet remain humane in the process. In a sense, we are all recruited to become detectives and unravel the contradictory evidence and faulty perception. Where does the truth lie? Perhaps in the long silences filled with nothing but the sounds of the desert. The film will be released later this year in the U.S. by specialty distributor The Cinema Guild and very likely will make the cut for the Best Foreign Language Film Oscar. Requiring great patience, this is a film that yields great rewards.