Hollywood can scoff and wax cynical when a world famous starlet decides to go behind the camera to helm her first feature film, but there is nothing about Angelina Jolie’s IN THE LAND OF BLOOD AND HONEY that maligns it as a vanity project. Whether or not you believe that Jolie (and her partner Brad Pitt) are phony philanthropists or the real deal, the truth is that Jolie has put her money where her mouth is and has been a truly dedicated social activist and world representative for UNICEF. Her new film, which opens for an Oscar qualifying run in New York and Los Angeles this week, has already been nominated for a Golden Globe Award as Best Foreign Film, and illuminates a dark period of world history when the former Yugoslavia was breaking apart at the seams after five decades of totalitarian rule. 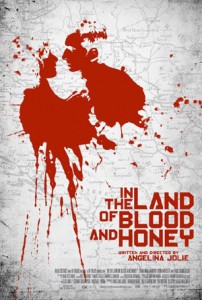 The atrocities that accompanied the Bosnian conflict in the 1990s are well known, but like films on the Holocaust, depicting the full force of the horror is a tricky proposition, with a creative challenge for the director to not lapse into a kind of torture porn prurience or numbing the emotional reaction of the audience with repetitive scenes of unpleasant realism. The best films in this sub-genre not only depict these terrible acts, but provide some kind of larger understanding as to why they were perpetrated. In this film, which Jolie also scripted, there is no softening of the crimes committed by Bosnian Serbs against their Muslim neighbors. In fact, with the exception of the agonized main character, Danijel (Goran Kostić), the Bosnian Serbs are uniformly monstrous and Jolie assaults us with a barrage of brutal rapes, baby killings, and point-blank murders, which are disarming and difficult to watch (however important it is for us to witness such things).  The realism is heightened by the film’s dialogue being in Serbo-Croatian (with occasional English-language news broadcasts) and the revelation of the poisonous legacy of Serbian nationalism through the history lessons of Danijel’s father, the brutish General Nebojsa Vukojevich (Rade Šerbedžija), who lectures his son on Serb superiority.

The emotional thread here is a kind of Romeo and Juliet story (a classic theme in a story of bitter rivalries), depicting the doomed love affair between Danijel, a a reluctant captain in his father’s army, and the Muslim Ajla (Zana Marjanović), who is saved from rape or worse by being given special protection as the official portrait painter of the army. The dramatic tension in the storyline comes from Danijel’s conflicting responses, his innate goodness and desire to do right by Ajla as set against the pressures of his father’s brutal anti-Muslim feelings and the dictates of a war where the most inhuman behavior is not only expected, but rewarded. That a glimmer of human decency can thrive under the most inhumane conditions is the sole ray of hope in this brutal and unforgiving film, but Jolie (as Shakespeare did before her) points to love as being the only salvation, and in this sense the film fulfills its promise and illuminates its weighty themes. To view the film’s trailer, visit: http://www.youtube.com/watch?v=oRcw17z3sWc