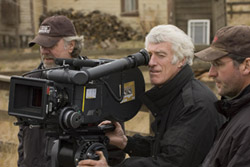 Roger Deakins, ASC, BSC, nine time Best Cinematography Oscar nominee for Best Cinematography joins American Cinematographer Associate Editor Jon Witmer in a rare and inspiring conversation on March 3rd at Createasphere’s Entertainment Technology Expo.  Deakins is the recipient of the 2011 Lifetime Achievement Award from the American Socitey of Cinematographers.  His Academy Award nominations include True Grit, No Country for Old Men, The Shawshank Redemption, Kundun, The Assassination of Jesse James by the Coward Robert Ford, The Reader (shared credit with Chris Menges), Fargo, O Brother, Where Art Thou?, and The Man Who Wasn’t There. He has been nominated 10 times for the American Society of Cinematographers (ASC) Award and won the award twice for Shawshank Redemption and The Man who Wasn’t There.  Deakins has enjoyed a twenty year collaboration with The Coen Brothers and has worked with many of the leading directors of our day on titles including Revolutionary Road, Doubt, A Beautiful Mind, The House of Sand and Fog, Homicide, Sid & Nancy, and  many more including visual consultant credits for WALL•E and How To Train Your Dragon.

(Seating is first come, first served – you must be registered for the expo to attend.)