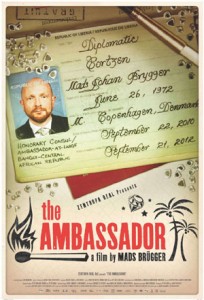 The 24th International Documentary Film Festival Amsterdam (IDFA), the world’s largest and most prestigious film event devoted to the non-fiction form, will open on  with THE AMBASSADOR by Danish filmmaker and journalist Mads Brügger Cortzen. In this documentary, Cortzen exposes the trade in diplomatic passports in Africa – a trade in which Westerners play a major role. The film, shot largely using a hidden camera, reveals its effects on the political and social structure of the fragile democracies of the continent. In the film, Cortzen, dressed in a neo-colonist style, goes to the Central African Republic to become an ambassador for Liberia. Once there, he sets up a match factory, run by Pygmies, as a cover for his ambitions in the diamond trade. The director is best known for his previous film THE RED CHAPEL, which he won a Jury Award at the 2010 Sundance Film Festival. IDFA runs from November 16 to 27. For more information, visit: www.idfa.nl