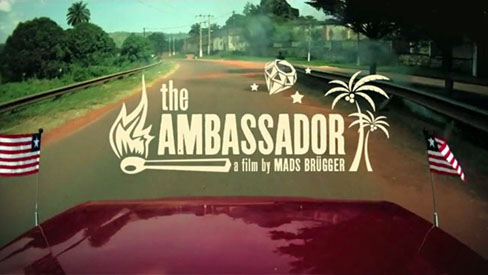 Trickery is one of the cards that filmmakers can use to make a political statement. That was certainly the modus operandi of Danish director Mads Brügger, whose incendiary tale THE AMBASSADOR opened IDFA, the International Documentary Film Festival Amsterdam on Thursday evening. Made up almost exclusively of hidden-camera footage, the film shows Brügger acquiring a diplomatic passport and travelling to the Central African Republic to investigate the trade in blood diamonds, posing as a Liberian Consul. The filmmaker hides behind the mask of a strange, enigmatic and decadent white diplomat who arrives in central Africa, having recently bought an ambassadorship and claims to be a do-good rich business man, who has come to spearhead a diplomatic mission. Officially he is there to start a factory that produces matches – this, to employ locals and teach how to make this simple piece of fire-making equipment. Unofficially he is really there to gain access to vast reserves of diamonds. In its genre-breaking, tragi-comic way the film skewers the bizarre and blatantly corrupt world of African diplomacy. This is the not the director’s first stab at international controversy. In 2010, he won the Sundance World Cinema Documentary Award for THE RED CHAPEL, in which he managed to get a Danish-Korean acting duo into North Korea for a performance

Now that the documentary is being shown at IDFA, with rumors already swelling that it will be included in the World Cinema Documentaries competition at the Sundance Film Festival, it is not surprising that the film is ruffling some feathers, particularly among Dutch businessman who helped Brügger get his diplomatic passport. One of these business contacts has been proclaiming on Dutch radio and Dutch television that he had been duped, that Brügger used illegal means to get services and information, and that in the documentary he now comes across as a crook. He is pushing Festival honchos and other local officials to have all screenings of the film forbidden (fat chance of that). Needless to say, all the local publicity has created a buzz that has seen all of the film’s public screenings sell out in a matter of hours. To view a trailer, visit: http://www.imdb.com/title/tt2048877/