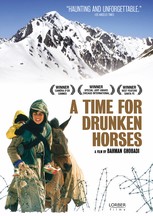 New York, NY – February 1, 2011 – Lorber Films announces the DVD release of A Time for Drunken Horses (2000), a powerful and moving story of Kurdish life in Iran from director Bahman Ghobadi (Turtles Can Fly, No One Knows About Persian Cats).

This “deeply absorbing” film (Entertainment Weekly) is the winner of the Camera D’or at the Cannes Film Festival, the Special Jury Award at the Chicago International Film Festival, and was named Best Feature at the Santa Fe Film Festival.  The DVD is priced at $24.95, and is available for pre-book on January 18, 2011. The street date is February 15.

“Haunting and unforgettable” (Los Angeles Times), Ghobadi’s debut film explores a Kurdish family, living in an area of extreme poverty on the border of Iran and Iraq. After losing their parents, the four children must provide for themselves, and the oldest son must face the rough terrain and bandits in order to raise money to pay for an operation that could save the life of his developmentally-disabled younger brother.

However, when plans for an arranged marriage are made, it threatens to separate the siblings and bring them apart from each other.

About Kino Lorber
Kino Lorber is the newly formed company that combines the resources, staffs and libraries of Lorber Films, Alive Mind and Kino International, bringing together industry leaders Richard Lorber and Donald Krim to create a new leader in independent film distribution.