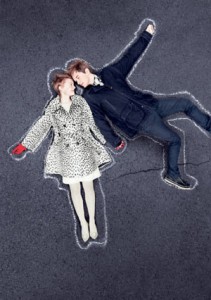 A new film from indie auteur Gus Van Sant is always a point of interest. His latest, a heartfelt romantic drama titled RESTLESS, is certain to excite controversy and illuminate yet another tonality of one of indie cinema’s most prolific talents. RESTLESS is the story of Annabel Cotton (played by rising star Mia Wasikowska), a beautiful and charming terminal cancer patient with a deep felt love of life and the natural world. Enoch Brae (played Henry Hopper, the son of iconic actor Dennis Hopper) is a young man who has dropped out of the business of living after an accident claimed the life of his parents.

When these two outsiders chance to meet at a funeral, they find an unexpected common ground in their unique experiences of the world. For Enoch, it includes his best friend, who happens to be the ghost of a Kamikaze fighter pilot. For Annabel, it involves an admiration of Charles Darwin and an interest in how other creatures live. Upon learning of Annabel’s imminent early passing, Enoch offers to help her face her last days with an irreverent abandon, tempting fate, tradition, and even death itself. As their unique love for each other grows, so do the realities of the world that they have felt closing in on them. Daring, childlike, and distinctly rare – these two bravely face what life has in store for them. Fighting pain, anger and loss with youth, playfulness and originality, these two misfits turn the tables on life and play by their own rules. Their journey begins to collide with the unstoppable march of time, as the natural cycle of life comes to claim Annabel.

Van Sant (whose career has spanned almost 40 years now with such gems as MALA NOCHE, DRUGSTORE COWBOY, MY OWN PRIVATE IDAHO, GOOD WILL HUNTING, ELEPHANT and MILK) brings his unique directorial style to this complex and moving story, as he creates yet another set of unforgettable characters who are both universal and marvelously specific. RESTLESS, which had its world premiere at the Cannes Film Festival, which was produced by Bryce Dallas Howard, Ron Howard and Brian Grazer, will be released by Sony Pictures Classics.