It has been quite a year for veteran actor Robert De Niro. In January, he was honored at the Golden Globes with a Lifetime Achievement Award. Currently, his brainchild and labor of love, the Tribeca Film Festival, is celebrating its 10th anniversary as one of New York’s most provocative film and culture showcases. Next month, De Niro heads to the south of France as President of the Jury at the Cannes Film Festival. After more than 50 years in the business and a film career that spans almost 70 years, the 68-year-old “king of Tribeca” is on a career roll. 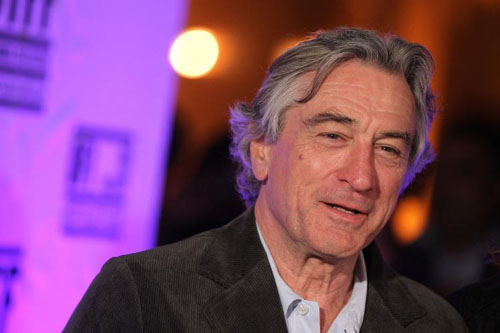 Robert De Niro was born in New York City, the son of Virginia Admiral, a poet, and Robert De Niro, Sr., an abstract expressionist painter and sculptor. His parents divorced when De Niro was only three, so he was raised by his mother in the Little Italy neighborhood of Manhattan. He was accepted at the High School of Music and Art but only attended for a short time, dropping out at age 16 to study acting at the Stella Adler Conservatory as well as Lee Strasberg’s Actors Studio. 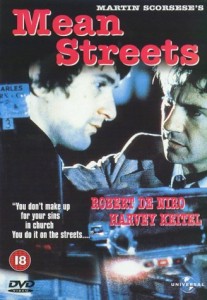 He made his film debut in 1963 at age 20, appearing opposite his friend Jill Clayburgh in novice director Brian De Palma’s THE WEDDING PARTY, which was not released until 1969. He then played one of Ma Barker’s violence-prone sons in the cheapie BLOODY MAMA, directed in 1970 by shlockmeister Roger Corman. 1973 was a pivotal year for the young actor. He gained popular attention with his role as a dying Major League Baseball player in BANG THE DRUM SLOWLY, while also beginning a lifelong collaboration with director Martin Scorsese in the seminal streetwise film MEAN STREETS. De Niro’s smalltime hood Johnny Boy, a volatile personality who could turn violent on a dime, was a career-making role for the young actor. In his next film, De Niro played a pivotal role in Francis Ford Coppola’s THE GODFATHER PART II, playing the young Vito Corleone, which earned his his first Academy Award for Best Supporting Actor. 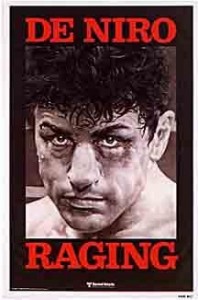 His career was now firmly set and he began a successful relationship with Martin Scorsese over the course of two decades, including such classic collaborations as TAXI DRIVER (1976), NEW YORK, NEW YORK (1977), RAGING BULL (1980), THE KING OF COMEDY (1983), GOODFELLAS (1990), CAPE FEAR (1991) and CASINO (1995). For RAGING BULL, his fierce portrait of boxer Jake La Motta, he demonstrated his commitment by packing on 60 pounds to play the boxer in his declining years. The role, still his greatest, won his a number of accolades including the Best Actor Oscar. 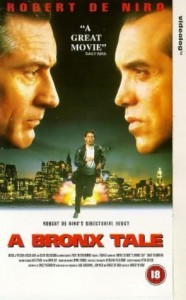 While always a reliable heavy or mobster, De Niro was afraid of being typecast and sought out roles in which he could demonstrate his deftness at comedy, including such films as BRAZIL (1985), MIDNIGHT RUN (1988), WAG THE DOG (1997) and ANALYZE THIS and the MEET THE FOCKERS franchises. In 1993, De Niro made his directorial debut with A BRONX TALE, an adaptation of his friend Chazz Palminteri’s solo stage show about his turbulent childhood in the Bronx. Aside from directing, he also played the role of Lorenzo, the bus driver who struggles to keep his son away from local mobster Sonny, played by Palminteri. His next directorial project did not come until 2006 and THE GOOD SHEPHERD, which starred Matt Damon and Angelina Jolie. The film depicts the origins of the CIA, with Damon portraying one of the top counter-intelligence agents during World War II and the Cold War. In June 2006, it was announced that De Niro had donated his film archive — including scripts, costumes, and props — to the Harry Ransom Center at the University of Texas at Austin.

De Niro has been dubbed the “don of downtown” particularly for his capital investments in the Tribeca neighborhood in lower Manhattan. His non-film projects have included the Nobu, Tribeca Grill and Locanda Verde restaurants and the Greenwich Hotel. He is thought to be a major real estate magnate, owning many retail and residential properties in the neigbhborhood. His concerns for Tribeca inspired his decision after the devastation of the September 11 attacks to launch the Tribeca Film Festival, as a means of restimulating the economy in a downtown Manhattan forever changed by the events.

Receiving monies from both the city and from corporate sponsor American Express, the Festival has become one of the important cultural and social events of the New York calendar. In its tenth year, with most of the action ironically not happening in Tribeca at all, the Festival has come into its own as a major supporter of indie and world cinema through the public screenings and its own distribution arm that brings a dozen films to larger audiences via VOD platforms on leading cable and satellite networks. The Tribeca brand has even extended to Doha, Qatar, where the Festival sponsors a sister event each October called the Tribeca Doha Film Festival. With the recent hiring of Geoffrey Gilmore of  the Sundance Film Festival, the Tribeca brand looks to become one of the most recognizable in the media world. De Niro the actor, the producer, the director, the resteranteur, the real estage magnate and the film festival honcho continues to make his mark as a New York institution and a film personality of unparalleled accomplishment.