Sidney Poitier, an iconic screen presence and a game changer for the way that African Americans were perceived in the turbulent years of the 1950s and 1960s, is being honored this evening by the Film Society of Lincoln Center in New York with the 2011 Chaplin Award. Poitier will be praised by an eclectic and star-studded list of celebrities including Dan Ackroyd, Harry Belafonte, Bill Cosby, Ruby Dee, Morgan Freeman, Danny Glover, Norman Jewison, James Earl Jones, Quincy Jones, Ben Kingsley, Mary Louise Parker, Quentin Tarantino, Chris Tucker and a number of surprise guests. 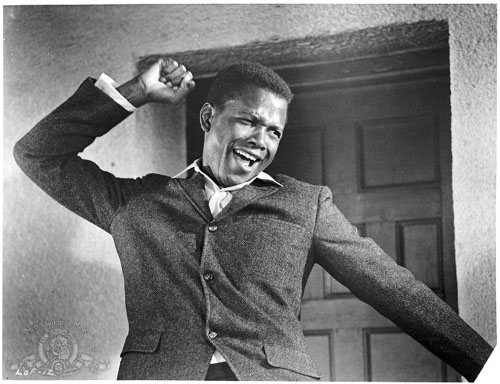 Let’s face it…..if there never was a Sidney Poitier, there could never have been a Denzel Washington, a Will Smith, a Forrest Whitaker, even a Halle Berry. Prior to his arrival in films in 1950, African Americans were mainly seen as maids or butlers on the silver screen, or as comic relief. Even when their natural talents gave them a particular poise in front of the camera (for example, the late great Lena Horne), the films in which they appeared were assembled in such a way that segments featuring the black actors could easily be snipped out for releases in bigoted small town America. The lack of visibility of color on the screens both big and small in the 1950s and 1960s was part of what fueled the civil rights movement and its cry for equal representation in American life.

His is the great American success story. He was born in 1927 in Miami, Florida, where his Bahamian parents travelled to sell tomatoes and other produce from their farm on Cat Island, The Bahamas. His birth gave him American citizenship but he was raised in the Bahamas, which was then an English colony. At the age of 17, he moved to New York City and held a string of menial jobs. He then decided to join the United States Army after which he worked as a dishwasher until a successful audition landed him a spot with the American Negro Theater. 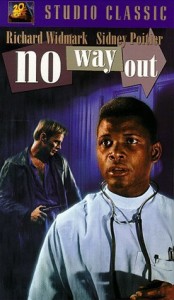 He was a commanding presence on the stage, with striking good looks and a thrilling deep voice that beautifully enunciated his every line of dialogue. His theater work brought him to the attention of Twentieth Century Fox honcho Darryl F. Zanuck, who offered him the second lead role in the civil rights drama NO WAY OUT (1950). His performance in the film as a doctor treating a white bigot (played by Richard Widmark), received strong notices and led to more roles, each considerably more interesting and more prominent than those most black actors of the time were offered. His breakout as a popular favorite was as the sole black student at a violent high school in the 1955 drama THE BLACKBOARD JUNGLE. 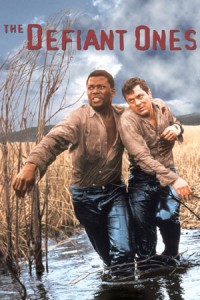 In 1958, when he had co-star billing with Tony Curtis in the Stanley Kramer social issue drama THE DEFIANT ONES, Poitier had joined the top rank of actors in his field. For his role in the film as a black inmate shackled to a bigoted white prisoner as they make their escape, Poitier became the first male black actor to be nominated for a competitive Academy Award. Five years later, he became the first black actor to win the Academy Award for Best Actor for his role as the handyman to a convent of nuns in LILIES OF THE FIELD (1963).

He memorably returned to Broadway in 1959 to star in the groundbreaking production of Lorraine Hansbery’s award-winning A RAISIN IN THE SUN. The play, about an inner city Chicago family who want to flee the ghetto and live in a previously all-white suburb, received rave notices, and Poitier revived his role in the film version in 1961. That decade provided him with a series of memorable performances in such diverse films as PRESSURE POINT (1962), THE SLENDER THREAD (1964), THE BEDFORD INCIDENT (1965) and A PATCH OF BLUE (1965). 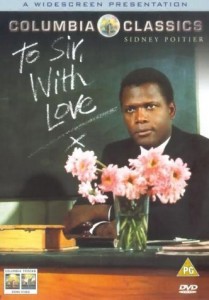 The year 1967 was a high point for the actor, who had become one of the top box office draws for both black and white audiences (a first in Hollywood). He gave three iconic performances in films for which he is perhaps best remembered. In GUESS WHO’S COMING TO DINNER, writer/director Stanley Kramer’s liberal look at the chasm between the races, he not only stands his own with acting legends Katharine Hepburn and Spencer Tracy, but embodies the image of a successful black man who has moved beyond the stereotypes of the past as he plans to marry a rich white girl. IN THE HEAT OF THE NIGHT, which won Oscars that year for the film, director Norman Jewison and Rod Steiger as a Southern police chief, Poitier is a galvanizing presence as a Northern police detective who investigates a murder in the still very bigoted South. When Poitier brazenly slaps the local white provocateur who has first slapped him, I remember an audible gasp in the audience who were both impressed and taken aback by such a bold gesture. In my personal favorite Poitier role, he is the apex of civility and good breeding as the teacher to a group of English slum kids in the schoolhouse drama TO SIR WITH LOVE (and oh, that theme song……).

He found less challenging role in the 1970s, although his follow up to IN THE HEAT OF THE NIGHT, when he again played the investigative detective Virgil Tibbs in THEY CALL ME MISTER TIBBS (1970) was another strong performance. In this period, Poitier turned his hand to directing. His most successful film was the 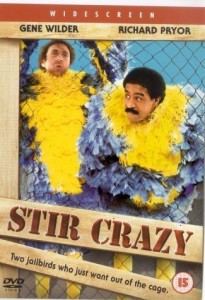 Richard Pryor-Gene Wilder comedy STIR CRAZY. Other films helmed by the actor include the western BUCK AND THE PREACHER, alongside fellow icon Harry Belafonte; UPTOWN SATURDAY NIGHT, when he co-starred with Belafonte and Bill Cosby. Poitier also directed Cosby in LET’S DO IT AGAIN, A PIECE OF THE ACTION and GHOST DAD. He also directed the first popular dance battle movie FAST FORWARD.

Poitier has won all the major film awards out there (including the Oscar, the British Academy Award, the Golden Globe Award, the Silver Bear from the Berlin Film Festival, the AFI Lifetime Achievement Award, the SAG Lifetime Achievement Award, the NAACP Image Award and the Presidential Medal of Freedom). In 2002, he was chosen by the Academy of Motion Picture Arts and Sciences to receive an Honorary Oscar, “in recognition of his remarkable accomplishments as an artist and as a human being.” In this case, the Academy spoke the truth. Congrats, Sidney Poitier on tonight’s honors at Lincoln Center.