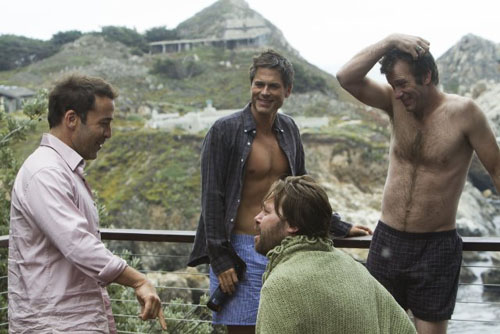 In this season of blockbusters and critical favorites, there are a number of “smaller” films that are getting released that deserve some added attention. Yes, none of these will probably be talked come Oscar night, and the awards season is zipping past them with lightning speed, but there are tidbits here and there worthy of some audience love. One of these is the American indie film I MELT WITH YOU, the tale of a group of friends on the outer side of 40, who go on a drug-fueled misadventure from which they learn some important life lessons. Yes, the theme has been done before, but this film by Mark Pellington has some serious acting chops with such interesting to watch actors as Thomas Jane, Jeremy Piven, Rob Lowe and Christian McKay. In the film, which premiered at last year’s Sundance Film Festival where it was picked up by indie distribution Magnolia Pictures, a weekend romp for four middle-aged buddies devolves into a drug-fueled, suicidal hell. The buddies are slice of life real characters: a teacher and failed author (Jane), a stressed-out equities trader (Piven), a corrupt doctor (Lowe) and an aimless misfit (McKay) . They meet up at a swanky rental house on the Big Sur coast for their annual reunion, where old resentments and jealousies come up like an untamed wildfire. The recriminations are fueled by excessive drinking and snorting of coke. In fact, seldom has a film with a major Hollywood profile depicted so much rampant, constant drug consumption in scenes that play out at extended length.

One of the keynotes of the script is the way that average guys use ultra-male-centric banter to devastating effect. In between skinny-dipping in the ocean and rolling down the nearby sand dunes, the men encounter some willing women (Sasha Grey, Carla Gugino) that just fuel their lust and self-loathing. In the second half of the film, tragedy befalls one of the characters, triggering a soul-baring session that pushes the remaining trio into emotional and psychological realms. As he accomplished with his film ARLINGTON ROAD, Pellington creates a heightened sense of tension and gives the actors a chance to reach for a kind of emotionally naked performance that may be over the top at times, but also feels authentic to this group of alpha males. The in-your-face cinematography of Eric Schmidt brings illumination to the thwarted desires of the characters and a brooding score by music team Tomandandy hits all the right melancholic notes. While it may not have the dexterity and awards clout of a film like SHAME, this is a small film that is not afraid to bring its audiences into the dark heart of the matter. For more information on the film and to view a trailer, visit:  http://www.facebook.com/IMELTWITHYOUFILM