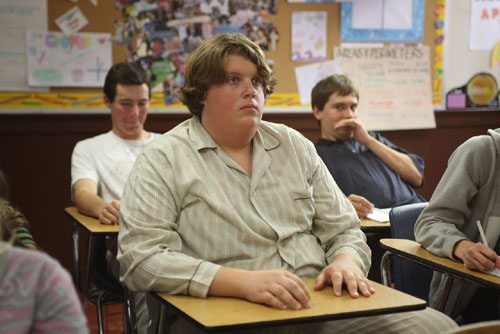 Films about troubled teens continue to hit a nerve with audiences. The latest is the Sundance Film Festival hit TERRI, directed with sensitivity and acuity by Azazel Jacobs (MOMMA’S MAN) and produced by the team behind BLUE VALENTINE and HALF NELSON. The film is a moving and often funny story about the relationship between Terri (Jacob Wysocki), an over-sized teen misfit and the motor-mouthed but well-meaning vice principal (John C. Reilly) who reaches out to him. 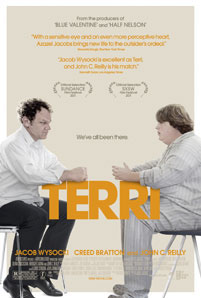 Wysocki, an over-sized young actor, gives a haunting and painfully aware performance as Terri, whose parents have abandoned him to an ailing uncle. The overweight, ungainly teenager is mercilessly teased by his peers, although he doesn’t help matters by showing up at school still wearing his pajamas. Resigned to his outsider status, Terri is surprised when his tough-talking vice principal (Reilly) takes an interest in him. Although his efforts are sometimes clumsy and dubiously unprofessional, the educator genuinely wants to help the misfit through this tough time. Terri befriends a pair of fellow misfits, Chad (Bridger Zadina), an edgy loner whose rebellion masks his own insecurities, and Heather (Olivia Crocicchia), a sexually precocious girl whose beauty proves to be a trap of its own. The three teenagers, so different on the surface, but all outcasts in the unforgiving high school hierarchy, find an unexpected, imperfect bond that reflects the poignance and pathos of the adolescent experience. 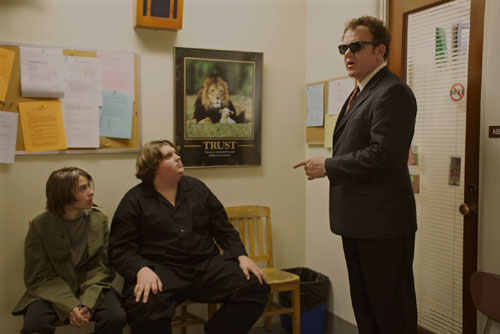 John C. Reilly brings all his subtle talents to the role of the principal, a mostly sympathetic portrayal but one that also has a kind of sly inappropriateness to it. The director, deftly combining authentic and candid elements with wry humor and compassion, tells Terri’s story with delicacy and complexity. The film ultimately is about the courage it takes to build relationships as the young man learns to reach outside his insular world. The film certainly speaks to anyone who has ever felt alone or misunderstood in high school. In other words, all of us. The film is one of the first releases by ATO (Art Takes Over) Pictures and looks to be one of the indie sleepers of the summer. For more information on the film and to view a trailer, visit: http://www.terri-movie.com/