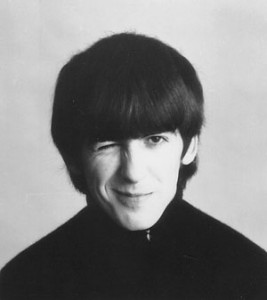 George Harrison, the bass player for the famed rock group The Beatles, was always referred to in the press as the “quiet one”. Now, almost 10 years after his death from lung cancer, several art exhibitions and a new documentary film by Martin Scorsese will reveal the intimate details of the Beatle who is perhaps the least known and celebrated of the group. GEORGE HARRISON: LIVING IN THE MATERIAL WORLD is a 4-hour exploration of the intimate personal and professional life of the man and the musician by one of film’s most celebrated director. The veteran director worked with Harrison’s widow Olivia, which gave him unprecedented access to personal home movies and other memorabilia. The film features telling interviews with such luminaries as Paul McCartney, Ringo Starr, Olivia Harrison, Terry Gilliam, Eric Idle, Eric Clapton , Yoko Ono, Tom Petty and Phil Spector.

The film was produced by pay cable network Home Box Office, which will present it in a two part special event on October 5 and 6. It will also be presented at this week’s Toronto Film Festival and later this month at the New York Film Festival. In addition, the Grammy Museum in Los Angeles is presenting the first major museum retrospective of the late musician’s life and career. A new book authored by Olivia Harrison will also be published at the end of September. All of this material chronicles the dual sides of the man…..a deeply spiritual seeker who practiced exotic forms of meditation and tantric yoga, and also was a championship race car impresario. He also was heavily involved in British filmmaking in the 1970s and 1980s, including executive producing several films starring the surrealist satirists Monty Python. The Los Angeles exhibition will be touring the country and eventually head to London and the rest of Europe. Scorsese has had a parallel career as a documentarist, having made films about Bob Dylan and the Rolling Stones.