It is a rather remarkable phenomenon that 1950s starlet Marilyn Monroe is as popular and intriguing today, nearly 50 years after her death, as she was in her sexpot heyday. Her image is used (legally and not) by corporations, tchotchke vendors and bloggers……she is almost better known these days as a symbol of sex appeal hiding a muted vulnerability than she is for the films that she made. Adding fuel to the fire of imagination that still grips the public imagination about our Norma Jean (“she lived her life like a candle in the wind”, Elton John famously rhapsodized) is MY WEEK WITH MARILYN, which is having its world premiere presentation this weekend at the New York Film Festival (quite a coup for the event). 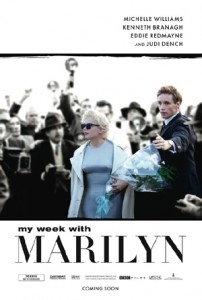 The film, directed by Simon Curtis (a television director best known for his small screen adaptation of the Charles Dickens classic DAVID COPPERFIELD), stars an incandescent Michelle Williams as the cinema siren, a bit of casting that when first announced seemed highly unlikely. However, photo spreads of Williams channeling Monroe have revealed how right a decision it was, with the actress showing her impressive cleavage and pouting lips to great advantage, as well revealing through her eyes and expression a core of both strength and vulnerability. In ways that have already been proven, Williams is by far the more gifted actress by dint of her work in such contemporary classics as BROKEBACK MOUNTAIN and BLUE VALENTINE, but Monroe is the icon here whose allure remains astonishingly bold and vibrant. She may be the poster child for all that is dispiriting about Hollywood and its callous treatment of its most sensitive denizens, but the woman had spunk and determination that transcend the cliché of her depiction as a victim of the system that brought her fame and world recognition.

The story is based on the memoir by Colin Clark, an Oxford graduate who gets his first taste of Hollywood glamour as a young film assistant on the set of THE PRINCE AND THE SHOWGIRL, a late 1950s romcom shot in the UK with the trick casting of Monroe as a saucy American showgirl and Sir Laurence Olivier as the prickly Prince.  When her new husband Arthur Miller leaves the film set in London, Clark takes Monroe out for a week of incognito fun. Eddie Redmayne, a Tony Award winner for his role on Broadway in the drama RED and one of the stars of television’s THE PILLARS OF THE EARTH co-stars as Clark, with distinguished actor/director Kenneth Branagh taking on the juicy role of Olivier, one of his key artistic influences and idols.  The veddy British cast also includes such favorites as Dominic Cooper, Judi Dench and Emma Watson.

The film serves as the Centerpiece Gala for the New York Film Festival, which continues through October 16. At the time of the announcement of the film’s world premiere at the event, Richard Peña, Film Society Of Lincoln Center program director and selection committee chair, was quoted as saying “After seeing Marilyn Monroe so often portrayed in films as a caricature, it is a pleasure to see this complex personality and unique on-screen presence portrayed so well by such a talented actress.” The Weinstein Company will release the film later this year with an aggressive campaign for its cast, and particularly its oh-so-dazzling lead, to figure strongly in the awards season ballyhoo. For more information on the film, visit its website: http://myweekwithmarilynmovie.com