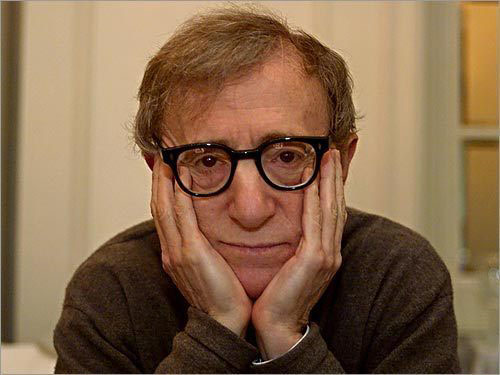 Consider this proposition…..you are an aging film director whose last hit film occurred when Ronald Reagan was President; you were caught with your pants down  in a sexual scandal with a stepdaughter 35 years your junior; you have burned countless professional bridges with a reputation for being demanding, exhausting and off-putting. And yet…..you are still at the top of your game. Not many film directors (or lesser mortals) could suffer the sling and arrows of all these misfortunes. But Woody Allen is either transcendentally gifted or phenomenally lucky(or both) because after a careers of hits and misses, his latest film will unspool as the Opening Night attraction at the Cannes Film Festival this week. 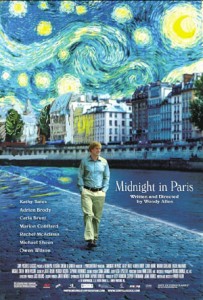 The quintessential New York filmmaker has not made a film in New York in almost a decade. After shooting in his native New York every year for almost almost 40 years,  and becoming a New York institution on a par with the Statue of Liberty or the Empire State Building, Allen has made his last six films in Europe. His latest MIDNIGHT IN PARIS was shot in the City of Lights and was therefore a logical choice for the Cannes opening gala on Wednesday, May 11 on the French Riviera. However, aside from geographical symmetry, the Cannes choice is viewed as an industry coup, reinforcing that festival’s self-regard as the world’s most important. No matter what the critical or box office reception of this latest romantic comedy (and let’s face it, Allen has had more than his share of stinkers), the prolific director somehow remains above the fray and continues to chug along, one film every year, finding new sources of financing and producers who want to be in the “Woody Allen business”.

Allen’s temperament is legendary and he has gone through an exhaustive list of collaborators, producers and distributors whom he has alienated (or been alienated from). His longtime relationship with Jean Doumanian, his producer and champion for over 20 years, unraveled in a long and divisive lawsuit that was a major industry sensation in the 1990s. This came almost immediately after his personal life became tabloid fodder when he broke up with his personal and professional partner actress Mia Farrow when it was discovered that he was having a covert affair with Farrow’s adopted daughter Soon-Yi Previn. The negative publicity (even though Soon-Yi was past the age of consent) was so vociferous that it looked like Allen’s career was over for good. However, not only did he continue his prolific pace but several films (HUSBANDS AND WIVES, CELEBRITY) of the 1990s period reflected his own personal bitterness and disillusionment with a media culture that had lionized him for decades. A toughness emerged in his latter work that has produced some of the great films of his latter period, including the London-set MATCH POINT and the Spanish romantic drama VICKY CRISTINA BARCELONA.

Allen’s latest confection stars a typical all-star ensemble cast (none of whom have been in a previous Allen film, I believe), including Owen Wilson, Rachel McAdams, Adrien Brody, Kathy Bates, Marion Cotillard, Michael Sheen, Nina Arianda and Allison Pill. The film, Allen’s 41st feature since his feature debut in 1969 with TAKE THE MONEY AND RUN, is a romantic comedy about a family traveling to the French capital for business. The party includes a young engaged couple (Owen Wilson and Rachel McAdams) who are forced to confront the illusion that a life different from their own might be better (such realizations come rather easily on the cobblestone streets of Paris).

MIDNIGHT IN PARIS is “a wonderful love letter to Paris”, Cannes Film Festival Director Thierry Frémaux gushed in a prepared statement. “It is a film in which the director takes a deeper look at the issues raised in his last films: our relationship with history, art, pleasure and life.” The film, which also features a turn by singer/actress Carla Bruni-Sarkozi (France’s current First Lady), will be released in France on the same day it makes its debut at Cannes, with an American release date set for May 20.  Releasing the film in North America is Sony Pictures Classics, who has worked with the director on several of his films this past decade.

As of this writing, with no reviews written yet, it is hard to know if Allen’s newest will be a critical home run, a disastrous strike-out or something in the middle. One thing remains certain however, Allen will continue with his one film per year artistic sojourn, with his newest being rumored to be shot in Italy and starring Robert Benigni. With at least 30 more European countries that have not, as of yet, hosted a Woody Allen film, we can expect the 75-year-old to continue indefinitely, and remarkably, remain at the top of his game.