The inaugural title at the New York’s Film Society of Lincoln Center’s long-awaited Elinor Bunin Munroe Film Center will be Andrew Rossi’s PAGE ONE: Inside The New York Times, a documentary look behind the scenes at the workings of the world’s most prestigious daily newspaper. The film will play both of the new venue’s screens on June 17. The Film Society is also finalizing details for a multi-day launch of the Film Center prior to the June 17 opening date. The film, which had its world premiere at this year’s Sundance Film Festival, will be distributed in North America by Magnolia Pictures. 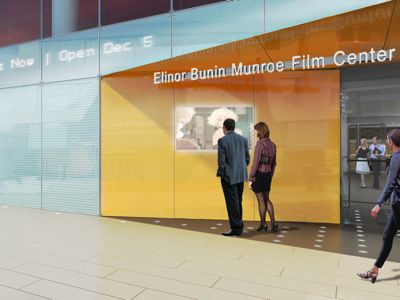 In a second announcement, the Film Society of Lincoln Center has appointed veteran film executive Bingham Ray as the Film Center’s “first-run strategy consultant.” Ray will work with FSLC program director Richard Pena and the organization’s team to identify first-run arthouse titles for the Film Center throughout the year.

The Film Center’s 17,500 square-foot venue will house two theaters, an amphitheater and a café. Both the 150-seat Francesca Beale Theater and the 90-seat Howard Gilman Theater will show new specialized film releases, with the Gilman also offering special programs. A 75-seat amphitheater, which contains a 152-inch Panasonic Plasma screen (the largest of its kind on public display in the country) will house lectures, panels and educational programs. For more information, visit: www.filmlinc.com