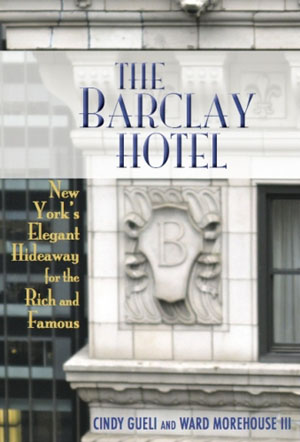 Opening its doors during the era that inspired The Great Gatsby and Downton Abbey, The Barclay Hotel offered its guests a touch of old world elegance amidst the swirling glitz and jazz of New York City?s Roaring Twenties.

The Barclay Hotel: New York’s Elegant Hideaway for the Rich and Famous provides a captivating inside look at the nearly ninety year history of The Barclay, which both impacted and reflected the people, events, style, and romance of its Midtown East neighborhood and New York City itself.

Cindy Gueli is a writer, professor, and filmmaker based in Washington, D.C. She has taught and lectured for institutions such as American University, The Washington Center, and House of Representatives Congressional Caucuses. She completed her bachelor’s degree at Georgetown University and earned two master’s degrees and a doctorate in History from American University. She is also the author of the upcoming book Lipstick Brigade: Government Girls in World War II Washington.

Ward Morehouse III’s love affair with grand hotels began long before he wrote his first landmark book, The Waldorf-Astoria: America’s Gilded Dream, which was followed by Inside the Plaza: An Intimate Portrait of the Ultimate Hotel. His father, the late drama critic Ward Morehouse, lovingly introduced his son to the glamorous life of luxurious hotels. He is a former staff correspondent of The Christian Science Monitor, Broadway columnist for the New York Post and author of eight other books.