Ah, New York City in the 1970s……while the city was crumbling into a cesspool of urban decay, vigilante violence and moral morass (with the federal government looking away while the city declared bankruptcy), the art underground was, in fact, in full flower. This paradox (or not nearly one, if one contemplates other times and places where the social environment was in chaos and the artistic output was intense, say Berlin in the 1920s) is the focus of several films that are currently or imminently in release that bring audiences back to the days of disco and debauchery. While their subjects vary, the ability of film to “bring you there” is, to use an antiquated expression, “groovy cool”. 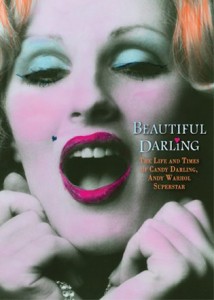 At the nexus of what was groovy and cool in those days was the pop artist Andy Warhol and his entourage of drug addicts, drag queens and superstars. Many documentary and fiction films have attempted to capture the downtown aesthetic of the “Warhol factory” but none does so quite as movingly as BEAUTIFUL DARLING, a new documentary film by James Rasin that chronicles the brief but dazzling career of Warhol superstar Candy Darling. A clear influence on Madonna, David was specifically her own artistic creation. While she impressed as an actress off-Broadway and in Warhol’s underground films of the period, her most complicated and rewarding artistic expression was her own life. Starting with her boyhood in a working class neighborhood on Long Island through the rough-and-tumble downtown New York scene of the 1960s and 1970s, Candy was a unique personality, whose dreams of stardom masked a life of pain and disappointment. The fact that she died at the age of 29 only amplifies her myth and her identification with other bombshells who left the scene early in life such as Jean Harlow and Marilyn Monroe. Aside from its moving  portraiture, the film also takes a loving  gaze at the New York City of the period….a place where misfits came to express themselves, when rents were cheap, sex readily available and any aspiring superstar was only moments away from their “fifteen minutes of fame”. The film opens later this month via specialty distributor Corinth Films. For more information, visit the website: http://www.beautifuldarling.com/

The influence of the Warhol films of the period (most directed by protégée Paul Morrissey, by the way) was the first shot in the expansion of what would soon become the American independent film scene. Working on shoestring budgets in the hot-house artistic atmosphere of the bohemian East Village, a group of anarchic film directors reimagined the underground aesthetic for their own generation. From this intoxicatingly original film stew came such influential indie auteurs as Jim Jarmusch, John Waters, Eric Mitchell, Bette Gordon, Susan Seidelman, Amos Poe, James Nares, Beth B, Scott B, Charlie Ahearn and Nick Zedd, and others. Directed by French newcomer Céline Danhier, BLANK CITY weaves together an oral history of the “No Wave Cinema” movement through evocative film clips and compelling interviews with the luminaries who began it all, including actor-writer-director Steve Buscemi, Blondie’s Debbie Harry, Hip Hop legend Fab 5 Freddy, Thurston Moore of Sonic Youth and photographer Richard Kern, with music tracks by such seminal musicians as Patti Smith, Television, Richard Hell & The Voidoids, The Contortions and The Bush. The film celebrates the period and the artists who believed in living their aesthetic. The film is currently on screen at New York’s IFC Film Center before beginning a national tour following its stellar film festival career. For more information, visit: http://www.blankcityfilm.com 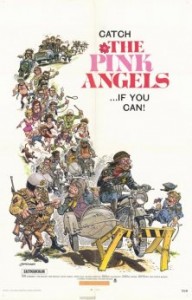 While the East Village neighborhood has changed over the past 30 years into more of a yuppified enclave (the sad truth about most of Manhattan), it still retains a hint of its anarchic past. The bar-cum-theater Otto’s Shrunken Head is also on the 1970s nostalgia kick with its planned screening of the obscure 1971 film THE PINK ANGELS. Described as a “cross-country, cross dressing comedy roadtrip”, the film anticipates the gender-confusion comedies like LA CAGE AUX FOLLES and THE BIRD CAGE that crossed audience boundaries to become mainstream hits. That is not the case with this curiosity, a gay biker gang road film directed by Lawrence Brown, that will be shown as part of Cine Meccanica;s weekly film series. For more information on this true cult classic, visit: www.cinemeccanica.word.press.com

As if the above is not enough to satisfy your craving for pre-AIDS, pre-George Bush nostalgia, the Jacob Burns Film Center north of New York City has also contributed to this 1970s lovefest with two films screening as part of the Westchester Jewish Film Festival (running through April 14). VIDAL SASSOON: THE MOVIE chronicles the rags-to-riches tail of the famed haircutter and salon owner, whose revolutionary “bias cuts” was all the rage for bourgeoise women of the period who wanted to prove their downtown credibility. Aside from evoking the madcap period in both swinging London and underground New York of the period, the film, directed by Craig Teper, is also a fascinating profile of a self-made man who remains a charismatic character well in his 80s. A second film that recalls the tensions and crazy quilt community that was New  York in the 1970s is evoked in the film NORMAN MAILER: THE AMERICAN.           While the famed writer’s career span several decades beginning with the postwar years following World War II, it was in the 1970s that his quixotic run for New York Mayor and his controversial television appearances where he battled both the status quo and female liberation activists that placed the wiry-haired writer in the forefront of both American letters and debate about the future direction of his adopted city and the country as a whole. For more information on these and other films in the series, visit: www.burnsfilmcenter.org.

Maybe I am biased because I came of age in that long-ago decade, but the 1970s, with their glistening grime, was the last time New York City was its decadent self and the last time that drifters, drag queens and degenerates could afford to live on an island that has long since been dominated by Wall Street fatcats and yuppie bureaucrats. Long live the 1970s………