Newlyweds is the tenth film written and directed by Ed Burns and the sixth to premiere at TFF. Burns, who wrote, directed and stars in Newlyweds, has had a strong connection with TFF since its founding. Ash Wednesday world premiered as part of the inaugural TFF lineup in 2002, and Looking for Kitty, Purple Violets and Nice Guy Johnny have also been Festival premieres over subsequent years. 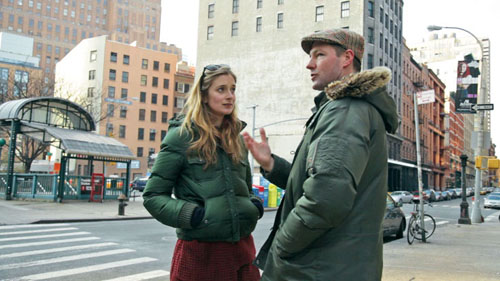 The film, shot almost exclusively in New York City’s TriBeCa neighborhood, is a chronicle of modern marriage, pointing out an essential truth: When you get married, you’re not just getting a husband or wife—you’re getting the family, the friends, and even the exes. With crackling humor and sharp insights into contemporary relationships, Burns tracks a newly wedded couple whose honeymoon period is upended by the arrival of the husband’s wild-child baby sister and the crumbling marriage of the wife’s meddlesome sister. The cast includes Burns, Caitlin Fitzgerald, Max Baker, Marsha Dietlein Bennett and Kerry Bishé. Burns produced the film with producing partner Aaron Lubin and William Rexer. Mike Harrop served as executive producer.

“There is no better way to close this year’s festival than with this film, Newlyweds by Edward Burns,” said Nancy Schafer, Executive Director of TFF. “He is one of Tribeca’s best friends. He lives in our community, and this film, which is exceptional and may very well be his best, was both shot in the neighborhood and captures the zeitgeist of a community and its relationships that is intimate and fun and so true. Closing night will be like coming home for all of us.”

“Tribeca is my home in every sense—it’s where I live, and it’s also the place where I have been so proud to show my work,” said Burns. “And from the beginning, the Festival has been a wonderful place for me to showcase my films and enjoy the kinds of conversations that I love as a filmmaker and a New Yorker.”

The 10th annual Tribeca Film Festival will take place from April 20 through May 1, 2011.

Tickets for the Festival will be $16.00 for evening and weekend screenings, and $8.00 for daytime weekday and late night screenings.

Single ticket and discounted ticket package sales begin for American Express Cardmembers on Tuesday, April 12, 2011, for downtown residents on Sunday, April 17, 2011, and for the general public on Monday, April 18, 2011. Single tickets can be purchased online, by telephone, or at one of the Ticket Outlets, with locations at Tribeca Cinemas at 54 Varick Street, Chelsea Clearview Cinemas at 260 W. 23rd Street, and AMC Village VII at 66 3rd Avenue. The 2011 Festival will continue ticket discounts for evening and weekend screenings for students, seniors and select downtown Manhattan residents. Discounted tickets are available at Ticket Outlet locations only. Discounted ticket packages can only be purchased online and by phone. Additional information and further details on the Festival can be found at www.tribecafilm.com.