Berlin, February 9, 2011—-At first glance it seemed like an odd fit…..a Western to open the 2011 edition of the Berlinale? Well, it helps that the cowboy tale is written and directed by two of the most respected film auteurs in the business….Joel and Ethan Coen. TRUE GRIT, the remake of the 1968 film that won John Wayne his only Oscar, is not only a tour de force for les freres Coens but has emerged, rather unexpectedly, as one of the major box office bonanzas of the year. It is far and away the most successful film the Coens have ever made, grossing more than $160 million worldwide and still very much in theatrical release….doubling the gross of their 2008 multi-Oscar winner NO COUNTRY FOR OLD MEN. With 10 Oscar nominations for the flm this year, this somewhat subversive take on the classic oater genre has to be judged a major aesthetic and commercial success, and a canny Opening Night Gala for the Berlinale. The Coens and stars Jeff Bridges and Hailee Steinfeld will walk the red carpet on Thursday night. 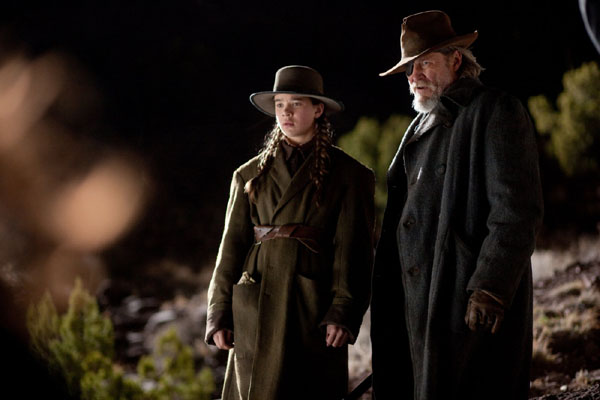 The film offers true and gritty roles for its main characters: a boozy vigilante played by Jeff Bridges; a self-righteous U.S. marshall played by Matt Damon; and a teenage girl with revenge on her mind, played by newcomer Hailee Steinfeld. Both Bridges and Steinfeld are nominated for Best Actor and Best Supporting Actress respectively.

In this adaptation of a classic novel, a 14-year-old farm girl named Mattie Ross sets out the capture the killer of her father by hired hand Tom Chaney (played by Josh Brolin). To help her, she hires the toughest U.S. marshal she can find, a man with “true grit,” Reuben J. “Rooster” Cogburn (giving Jeff Bridges a fitting follow up role after his Oscar win last year). Mattie insists on accompanying Cogburn, whose drinking, dirty mouth and lazy behavior challenge her faith in him. Against his wishes, she joins him in his trek into the Indian Nations in search of Chaney. They are joined by Texas Ranger LaBoeuf (Matt Damon), who wants Chaney for his own purposes. The unlikely trio find danger and surprises on the journey, and each has his or her “grit” tested.

The Coens tell the tale rather straightforwardly, which has been embraced by lovers of the Western genre, but add enough unexpected spice and twists to please their admirers. Stunningly shot by their long time cinematographer Roger Deakins, the film has instant iconic status as a tale of heroism, courage and determination as can only be embodied in films about the Old West. Ironically, the Western genre, in its film, television and literary forms, have always been favorites in Germany, which has very little of its own “untamed land”. A love of strong characters and dogged determinism makes this a not quite surprising opener for the Berlinale after all.