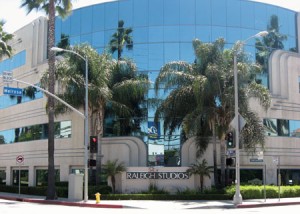 As the longest continuously operating studio in the USA, Raleigh Studios has played a central role in creating and supporting the modern entertainment industry. Over the years, the studio has thrived because of its commitment to providing both the highest levels of studio service and the most advanced production technology. Located on Melrose Avenue in the heart of Hollywood, Raleigh Studios is the premier independent studio in the country.  It was the filming site for such classic movies as “In the Heat of the Night,” with Rod Steiger and Sidney Poitier (which won the Oscar for Best Picture of 1967), “The Best Years of Our Lives” (the Best Picture of 1946), “What Ever Happened to Baby Jane” (1962, with Bette Davis and Joan Crawford) and the original “A Star is Born” (1937) with Janet Gaynor. They also filmed well-known TV series here, such as the first few years of “Gunsmoke” (with James Arness as marshal Matt Dillon),”Death Valley Days” (starring future President Ronald Reagan) and”Have Gun Will Travel” (with Richard Boone as “Paladin.”).

To enter, please submit your film via  www.withoutabox.com