As it has done for the past 17 years, European Film Promotion, the pan-European promotion agency made up of individual country film promotion boards, is putting the spotlight on up-and-coming acting talents, proclaiming a lucky group of young thespians as this year’s Shooting Stars. Ten of the most promising young actors in Europe, who were chosen by a high-profile jury of film industry professionals have concluded a whirlwind weekend of events at the Berlin International Film Festival today with photo-sessions, casting director meetings, a press conference, all topped by a gllittering awards ceremony held on the stage of the Berlinale Palast just prior to the screening of Ralph Fiennes’s adaptation of Shakespeare’s tragic play CORIALANUS, in the presence of the film’s acting ensemble of Fiennes, Vanessa Redgrave and Gerard Butler. 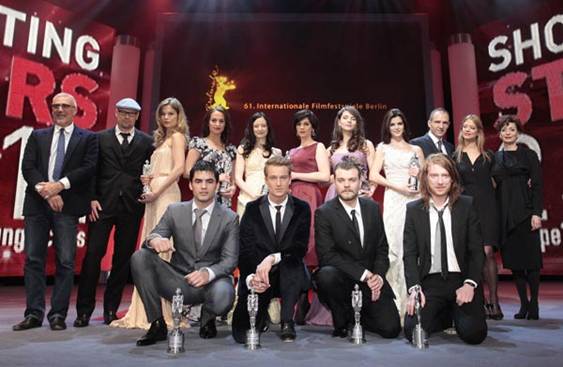 Fiennes joined jury member Heike Makatsch (German Shooting Star 2001) to welcome the ten actors, who all received a Shooting Stars Award on stage. The award is sponsored by Studio Babelsberg, to celebrate their recent achievements  and future potential. Following the ceremonies, the group of actors and actresses were the guests of honor at a VIP dinner, where they had a chance to meet key members of the international film community. Each actor also received a chic jewelry trinket of an exploding star, representing the emergence of the actors on the world stage, provided by TESiRO.