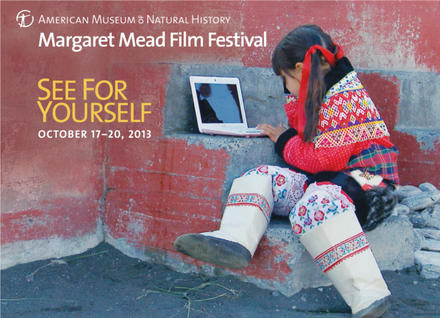 Guided by the most appropriate “See for Yourself”  the festival  established again a reflexive link between its  audience and  diverse cultures and  the challenges  they face  by presenting an outstanding program of  documentaries and  videos from October 17-20.  This year’s edition covered 38 productions, including 7 short films.  A wide range of themes was broached incorporating but not restricted to developmental questions, environment challenges, artistic endeavors in film and music making, modernization, sports, global capitalism, identity processes, visual anthropology, the impact of tourism and the international organ trade.

Established in 1977 in honor of the Anthropologist Margret Mead the festival is the oldest New York fest with an exclusive focus on documentaries.   Staged at the American Museum of Natural History the festival is shaped by the Museum’s mission of research and education and its ethnographic focus. Thus special seminars establish dialogues with the audience on new forms of ethnography,   the boundaries of art and visual anthropology and the impact digital media on storytelling.  On a lighter note the audience benefitted from events which featured the acclaimed single shot People’s Park film on a Chengdu park in China, Native American Zuni music, a Chinese Jazz band, and at the closing award ceremony, a Mariachi dance party. Principal sponsors of the festival are The New York State Council of the Arts and HBO

The festival opened with MISS NIKKI AND THE TIGER GIRLS tracking the rise of Myanmar’s first all-girl band to international attention.  This documentary is most appealing and entertaining film is in a traditional society country which is going through dramatic political changes. Under the watch of the military police and the disapproval of the older generation, the girls are able to assert themselves .They play for an audience of enthusiastic young people and fight the prejudice against singing young women assumed to be sex worker. Managed by a young Australian May, the band changes its name and selects Me N Ma Girls to eventually leave their country for Los Angeles contracted by an American music entrepreneur.

Both GRINGO TRAILS and TALES FROM THE ORGAN TRADE are superbly produced documentaries providing questioning accounts of urgent current topical issues.  Pegi  Vail presents in Gringo Trails ’s the devastating impact  tourism  has been having  in Latin American, African and Asian countries such as Bolivia and Thailand. Accepted by the host countries as a badly needed source of financial revenues unhampered tourism tends to impair local cultural configurations and often causes environmental degradation. Once written up by travel magazines or propagated through the internet exotic sites discovered by backpackers and others become magnets for a constantly growing number of tourists and in the extreme for mass travel. As Enzensberger suggested many years ago, having reached the object of authentic experience in a foreign country the tourist traffic unwittingly destroys it.   Gringo Trails provides excellent footage of the tourist sites and covers in compelling sequences the nefarious impact of organized and mass tourism, though suggesting some remedies to develop sustainable eco- tourism, such as stronger local government regulations.

In Tales from the Organ Trade, one of the most important documentaries of this year’s festival, Ric Esther Bienstock offers comprehensive insights into the international organ trade.  Her impressive documentary includes a case study of kidney transplants in Kosovo as carried out by a Turkish doctor Y. Sonmez and an Israeli surgeon M. Harfel in the Medicus clinic now closed down. Attempts to prosecute the principals have not been successful thus far. The multibillion dollar illegal kidney transplant industry is driven by the demand for kidneys in North America, Western Europe and the Middle East, and the ready supply from the Indian subcontinent, the Philippines, and China. The World Health Organization  estimates that 75% of all  illegally traded organs are kidneys and that organ transplants, including illegal ones, met only 10% of the medical needs for such transplants.  An estimated 10,000 illegal kidney transplants are carried out each year.

Given the increase in postindustrial countries of diseases such as Diabetes, the demand for kidney transplants has been growing steadily.  Kidneys travel from the South to the North, from poor to rich countries, from the underclass to upscale groups, from colored to white people. In all countries except for Iran the harvesting of kidneys for pay is illegal and kidneys can be donated only under strict rules. Yet only one third   of the individuals on the kidney transplant waiting list get their life saving replacement on time, the others die.  Rather than passing judgment Bienstock provides up-to-date information from all over the world and enlightening interviews. We meet individuals who face certain death without an illegal transplant but also the impoverished donors, (in this documentary mostly from the Philippines), who sell their kidneys in this well organized trade.  In both cases the motivation is clear saving one’s life requires purchasing a costly transplant surgery, trading a kidney for cash is an apparent way out of duress.  The patient pays for the transplant frequently carried out in India or, China between $100.000 $200.000, the kidney donor receives on the average up to $10,000. Organ brokers, medical establishments and other parties in the illegal transplant trade benefit   greatly.  Recent news report s provide more insights.. Severe poverty among Syrian refugees results in a growing number selling their kidneys. Yet the growing discrepancy between the supply and the demand for kidneys has driven down the price paid to $7.000.

As in past editions the Margaret Mead Film Fest provided a unique platform for learning and reflection articulating an amazing range of issues  and questions.