Austin, Texas, the state capitol and the venue for the South By Southwest Film, Music and Interactive Festival (SXSW), is an island of liberalism in a sea of conservative attitudes. While Texas is the definite “red” state, characterized by its conservative politics and rigid social attitudes, SXSW is by design and nature a progressive affair. This slightly schizophrenic relationship has created some interesting moments at SXSW in the past week, with a film that uncovers the hidden secrets behind a supposedly “whiter-than-white” existence winning top honors.

NATURAL SELECTION, a debut drama by local Texas filmmaker Robbie Pickering, grabbed the lion’s share of the top prizes, including the Narrative Feature Competition Grand Jury Prize, two acting awards, special prizes for screenplay, cinematography and editing, and the Audience Award as well. It was, without a doubt, the breakthrough film of the festival. 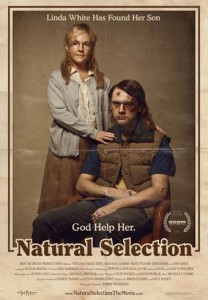 The film tells the tale of Linda White, a barren Christian housewife, who leads a sheltered existence in suburban Texas. Her world is turned upside-down when she discovers that her dying husband has a 23-year old illegitimate son living in Florida. Linda sets out to grant her husband’s final wish and travels to the sunshine state to find the lost son and bring him back to Texas before her husband passes away. In the classic mode of road movies, she develops a special bond with the young man and their relationship, at first testy, soon blossoms into a soul-seaching encounter for both of them.

The film, which took its director and producer over six years to complete, tells a simple story in a straightforward manner that consciously avoids Hollywood cliches. The writer/director based the lead characters on his own religious mother and cancer-stricken father, with the young man in the story obviously fulfilling a role as a surrogate for the filmmaker himself.

While shot on a shoestring budget, it is this richness of spirit and the authentic locale, twang and atmosphere intact, that should help the film find a distributor and ultimately an audience. In the same vein as WINTER’S BONE, the film celebrates regionalism and basic human truths in an unvarnished way that is not immediately pretty to look at but which highlights the common human experience of pain and redemption.

The film, which has yet to snag a distributor, is represented by International Creative Management (ptrinh@icmtalent.com) and Traction Media (mo@traction-media.com). For more information on the film and to view a video trailer, visit: http://www.naturalselectionthemovie.com/