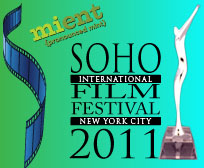 New York’s crowded film festival calendar has now become positively stifling with the (welcome) addition of the SoHo International Film Festival NYC  (SIFFNYC), which builds on its auspicious debut of last year to offer a second edition of 8 days of films, professional workshops and special events. The Festival will be held at downtown New York’s Quad Cinema from Friday, April 15th through Friday, April 22nd.

Among the special events are a Night of German Independent Cinema next Wednesday, April 20 and the Festival’s Awards Gala on Friday, April 22, which includes the inaugural SIFF NYC Icon Award, honoring a New York film artist who has achieved a high degree of creative excellence over the years. The first recipient of this newly minted prize is New York character actor Frank Vincent, well known for his  work with Martin Scorsese, Robert DeNiro and Joe Pesci in the classics RAGING BULL, CASINO and GOODFELLAS. Vincent has had starring roles in such seminal New York film and television projects including DO THE RIGHT THING, JUNGLE FEVER, NIGHT FALLS ON MANHATTAN, THE POPE OF GREENWICH VILLAGE and THE SOPRANOS. The day before receiving his prize, on Thursday evening April 21, the Festival will present “An Evening with Frank Vincent,” hosted by director John Gallagher (THE DELI, BLUE MOON), a longtime colleague who will direct the actor in the upcoming feature comedy FICKLE. For more information on the Festival, visit: http://www.site.siffnyc.net/Home.html