While some people in America may already be nostalgic for George W. Bush (do not count me in that group), one of the guilty pleasures that one could perhaps pine for was the former President’s odd use of the English language. Although he was educated at Harvard, he was prone to colloquialisms that were bad mashups of words that he kind of, sort of just made up. He shares this quality with the lead actor in the new Italian satirical comedy QUALUNQUEMENTE translated as WHATSOEVERLY. In Italian, it is a nonsensical use of the words whatever and so what, and its collision course matches the film’s chaotic nature. 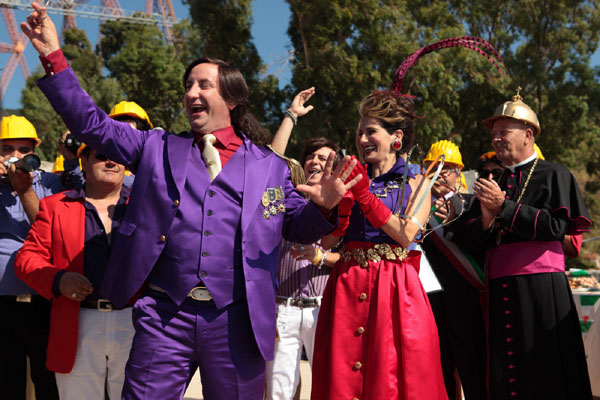 Comedy actor Antonio Albanese created the character of Cetto La Qualunque, the grubby, greedy, politically incorrect striver on a popular television series. In this expanded film, director Guilio Manfredonia expands the premise and has the slovenly and salacious Cetto run for Mayor in a small Italian seaside town in the lazy, hazy, crazy south of Italy. Cetto knows no bounds…..he flaunts off his garish wardrobe, trophy girlfriend and gold chains without regard to consequence. His affairs with women, his non-payment of taxes, his confrontational style with the press, his flaunting of all protocol and convention…..sound like anyone you know? The target of this hilarious satire is clearly the current el primo Silvio Berlusconi, who is now awash with scandals of his own involving an underage stripper and millions of unpaid taxes.

However, the joke of WHATSOEVERLY, which screens in the Panorama section here, is that the more outrageous the political candidate’s behavior, the more he is embraced by the masses. In his gold and pink suits, garish jewelry and foul mouth, he becomes a kind of peoples’ prince, living out the lives that they wish they had the courage to. That such a despicable lout could rise beyond the station of dogcatcher is the serious point here, and the film piles sequence after sequence of lurid behavior that is matched with the adulation of the crowds. Albanese has created a loudmouthed character who is clearly in the game for his own personal fame and wealth, social agenda be damned. And because this is satire, he makes the most outrageous public pronouncements and the crowd just eats it up.

Comedies are always hard here at the Berlinale, where more serious fare often rules. However, the “how can he top this” nature of the proceedings here, complete with over-the-top fashion and interior décor, makes this a local comedy that truly translates for an international audience.. In a sly yet obvious way, director Manfredonia offers a send up not only of the current political establishment but the public’s slavish allegiance to outrageous behavior that would have felled politicians anywhere else. The Italians, they are different, no?