Even in a year where indie films made considerable noise during the just-concluded awards season, the odds have never been as difficult for quality American indies to reach the big screen as they are now. While distributors are certainly on the lookout for the next WINTER’S BONE or THE KIDS ARE ALL RIGHT, many films simply disappear after an anemic theatrical opening or never make it to first base at all. 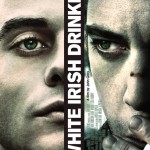 This comes to mind with the opening this month of one of the stronger films I was introduced to at the 2010 Toronto International Film Festival, certainly a prestigious world launch for any film. WHITE IRISH DRINKERS by veteran television director John Gray and to be distributed by Screen Media Films, is one to rush out and see, since the unforgiving reality of theatrical distribution is that few films have a chance to build their audience through word of mouth as they did in the previous decade. The film had a sneak preview on Thursday evening, as the opening night gala of the Craic Film Festival at New York’s Tribeca Cinemas, with special appearances by the actors Peter Riegert (Animal House, The Sopranos), Karen Allen (Indiana Jones films, Animal House), Stephen Lang (Avatar), Nick Thurston, Geoff Wigdor, Leslie Murphy & Director/Writer/Producer John Gray. In Toronto last September, I had a chance to sit down with the film’s articulate director and to interview two of its cast members. 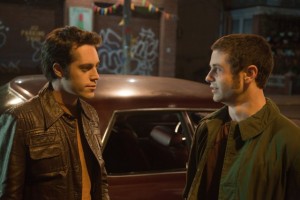 WHITE IRISH DRINKERS by veteran television director John Gray and to be distributed by Screen Media Films, is one to rush out and see, since the unforgiving reality of theatrical distribution is that few films have a chance to build their audience through word of mouth as they did in the previous decade. So, check out if the film is playing near you and make a point of seeing it on its opening weekend…..so that others can follow afterwards in the weeks to come. In Toronto, I had a chance to sit down with the film’s articulate director and to interview two of its cast members.

While all filmmakers are the inheritors of the film masters who came before them, it is important that their films register as original artworks too. In WHITE IRISH DRINKERS wades into “Scorsese/Saturday Night Fever” territory in a story based in the solidly Irish working class enclaves of Brooklyn of the 1970s. The story centers on two brothers, one a petty thief and the other a budding painter, who must rely on one another in the midst of a household dominated by their violent father and their sympathetic but powerless mother. Of course, we’ve seen this dynamic before, but Gray, who also produced and wrote the passionate script, goes beyond the cliches of the sub-genre to find a strong truth about family bonds and the need to transcend one’s origins.

“I had this script in my head for over 10 years”, Gray shared with me at an interview in Toronto. “I have been very busy doing features for television but this story continued to haunt me.” Drawing on his personal roots in Brooklyn, he has crafted an accurate portrait of working class life and the boundaries to be crossed as Brooklyn undergoes its own transformation from a city of immigrants to someplace approximating its chic image of today. “What I tried to bring to the film are lots of small, intimate moments that inform the characters and give the actors emotionally resonant set piees that reveal this particular time and place”, Gray continued. “We also got very lucky in getting a great cast of recognizable names and some impressive debuts that give the film its authenticity and truthfulness.”

Gray found choice parts for the likes of Stephen Lang, who finds great depth in the role of the abusive father; Karen Allen, who has some beautiful moments as the mother who holds the family together; and Peter Riegert as a hapless businessman whose craftiness is not revealed until the final reel. The film provides a major showcase for the attractive newcomer Nick Thurston, who provides a very winning and introspective approach to his role as the fledgling artist who needs to find a way out in order to most fully express his inner truth. Also strong is newcomer Geoff Wigdor, who connects with the violent outbursts and deep hurt in his character as the older brother (who must die a martyr’s death in the film). The film handles all the melodrama with a sensibility that never capsizes its emotional truth.

The script, which has an authentic ear for its milieu, was the attraction for the veteran actors who were attracted by the juicy roles in the film. “No question it was the sharp and inventive script that got me interested in playing this part”, actress Karen Allen shared in a candid moment with me in Toronto. “This was a drab character who, let’s face it, was not very attractive but who had an inner fire that was expressed in silent moments, and that is always a challenge for an actor”, Allen added. A veteran of both big budget Hollywood films and more intimate indies, Allen had been dividing her time between film and live theater projects, including a play she is looking to direct later this year. “When a challenging and non-glamorous part comes along like this, I really made an effort to get it”, Allen shared. “You have to keep challenging yourself as an actor otherwise you get pigeonholed so quickly in this business…..this was a beautiful, if difficult, project for me and i am really proud of the film.”

Beating the difficult odds, I am happy to say that WHITE IRISH DRINKERS will be opening theatrically on March 25, giving discriminating film lovers a chance to immerse themselves in this artfully done film and keep the indie film flame. So, check out if the film is playing near you and make a point of seeing it on its opening weekend…..so that others can follow afterwards in the weeks to come. For more information, visit: www.whiteirishdrinkersthemovie.com