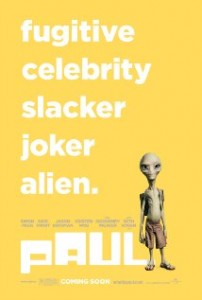 Director Greg Motola  teams up with writer-actors Simon Pegg and Nick Frost who star as a pair of dweeby  British nerds named Graeme Willy and Clive Gollings.  The pair visit Comic-Con in San Diego  and rent a RV to trek to Area 51 in Nevada where they meet up with an alien named Paul.

Paul is voiced by Seth Rogen which means he  acts and talks like a stoner hippie.

He drinks, curses, smokes weed and wears shorts.  He sometimes flashes people and has powers such as resurrecting the dead and turning invisible at will. Partly bromance and mostly sci-fi spoof, Paul is an amusing piece of entertainment which is at times funny and occasionally clever. With cameos from Jason Bateman and Kristen Wig adding a chase and bible thumping sidebar, Paul is lightweight and contagious.