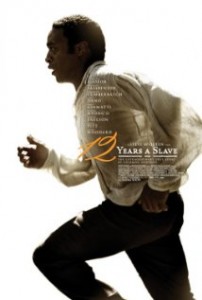 British Director Steve McQueen (“Hunger”, “Shame”) has created a truly original portrait of an American horror story with unprecedented force and savagery. It is a landmark film which will forever be remembered for its authenticity and power. It is the most important film of 2013 and should not be missed.

The story set up is a variation on “Sullivan’s Travels” but is hardly a comedy. A black musician, a free man living with wife and family in Saratoga, New York, is drugged, kidnapped and sold into human bondage. The film which is based on an actual memoir published in 1853 by Solomon Northup was adapted by African American screenwriter John Ridley.

Solomon (a stellar Chiwetel Ejiofor) at first hardly can believe what is happening as he is shackled and chained and shipped to a Louisiana plantation. He encounters an owner named Edward Epps, a “nigger breaker”, scripture –quoting bastard played by Michael Fassbender whose philosophy is summed up by his statement that “A man does how he pleases with his property”.

Solomon is sold to a more humanistic plantation owner played by Benedict Cumberbatch who recognizes Solomon’s innate intelligence and treats him with more dignity than other owners.  It is here that he encounters a carpenter and abolitionist played by Brad Pitt who helps him engineer his escape. Pitt, by the way, was instrumental in raising the funds that got this film made. It is a truly amazing work of art which is by far the front runner for the Best Picture Academy Award next year.