Rooted in reality and without the superhero tights, an impressive 3D success. The CGI transformation of Steve Rogers is fantastic. I worry that Stan Lee, through his Hitchkcock cameos, will appear in perpetuity in all Marvel movies.

How can audiences relate to World War ll heroes and villains? Let’s face it, the technology was – by today’s standards – hokey and primitive. The WW2 women were burdened by severe hairdos and unattractive clothes. Yet, the hoped-for Captain America mega-franchise required an origin story.

With Benjamin Button-style CGI, weakling Steve Rogers (Chris Evans) keeps getting refused for military service. What happened to enlistee desk jobs? Finally, the unhappy, titular “kid from Brooklyn” gets snatched from the back of the line to be the first created uber-soldier through steroids. Luckily, his injections boost no nasty roid-rage side-effects. An escaped doctor from Germany, Abraham Erskine (Stanley Tucci), recruits him as test subject 001. Rogers has the requisite perfect amount of unquestioned patriotism. 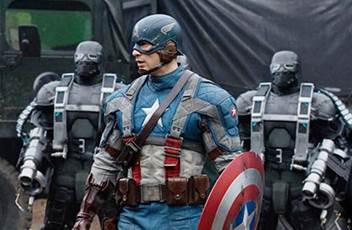 Instead of being hauled before Congress or questionably winning Olympic medals, Rogers is hailed as the new, white hope for hand-to-hand combat. Not only has Rogers developed extraordinary physical abilities, he’s become a military strategist! Give him men to lead!

When Rogers sheds his mousey exterior and becomes strikingly handsome, his psychological handicap vanishes. He is confident, heroic, but alas, not ready to try out his new sexually-charged identity. Captain America has morals and the Nazis are foremost in his mind. But first, his metamorphosis is not a secret but propaganda. He merrily goes on tour selling war bonds. Off to Europe, he’s heckled by Italians and realizes he is being a dancing monkey for the military. He wants combat.

Lucky for Rogers, Dr. Erskine’s former Nazis colleague was also working on a super-soldier. But, as happens, his formula goes horribly wrong. His creation, the Red Skull, formerly known as Johann Schmidt (Hugo Weaving), has earned his nickname by turning bright red. Like all villains (of course, I’m referencing the nose-less Lord Voldemort) Schmidt has lost his nose. Psychologists need to examine the meaning of this phenomena and the fact that having no nose makes men very, very mad. Schmidt has a flunky assistant (Toby Jones). With so many wonderful German actors out there, why cast American Tucci and British Jones?

Schmidt has one big advantage – a magic Rubik’s ice cube. He keeps looking at it with awe. It has powers against Captain America. The origin of this cube is muddy and ill-defined. It glows and has magical properties.

Back at Army headquarters, Captain America’s boss, Tommy Lee Jones, is easily crabby. The military is assisted by scene-stealer Howard Stark (Dominic Cooper), who orchestrates every technical widget while looking dapper and sexy. Stark wears a rakish moustache and holding pride of place for his heir, Iron Man’s Tony Stark.

Its Marvel Comics Godfather saga, but without a “caporegime”.

Rogers might have an obsession with the military, but he’s not gay. His platonic love interest – its WW2 morality after all  – British Agent Carter (Hayley Atwell) is a no-nonsense affair. There is a war going on and lives are at stake! Inhibited by her costume, hair and makeup, Agent Carter offers Rogers hope that there is another advantage to his un-natural transformation. But first, he must single-handedly win the war.

Knowing that today’s audience want upside-down kisses and a superhero with a sex drive, the writers, Christopher Markus and Stephen McFeely, use deep freeze to bring Captain America into the present for the sequel. I have a feeling there will be a romance for Captain America.

Wisely, director Joe Johnston has dumped the silly superhero costume and dressed Captain America in military-wear. For some reason, Captain America goes into a ground battle with a mask. Is he trying to recruit enemy fans?

I liked the entire look of the production by Rick Heinrichs and the cinematography by Shelly Johnson. And the 3D is terrific. At a running time of 2 hours 4 minutes, if you pay the higher cost for a 3D ticket, you get your money’s worth.