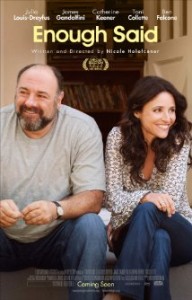 Director Nicole Holofcener once again demonstrates her directorial virtuosity with this remarkably poignant romantic comedy starring Julia Louis –Dreyfus and the late James Gandolfiini as Eva and Albert, middle age divorcees with kids. Eva is a masseuse shipping off her daughter to college while James is doing the exact same thing.

The movie starts light and upbeat but quickly brings to bear the complexities of modern life. She worries that he lacks discipline. He worries that his excessive weight will crush her when they engage in coitus.  Of course they will bond but it’s the twists and turns that make this film such a piercing experiment in comedy.

The catch comes when Eva starts hearing disquieting stories about a client’s ex-husband played with idiosyncratic charm by Catherine Keener as the poet named Marianne. She naturally turns out to be Albert’s ex-wife

The above description makes it sound contrived but oh how different it turns out due to the writing and directing of Holofcener whose oeuvre consists of four remarkable films: (1)”Walking and Talking” (2)”Lovely and Amazing”(3)”Friends with Money” and (4)”Please Give”

This is a tightly constructed 90 minutes which plays out beautifully due to the stunning chemistry of the two leads and the excellent cast including Tracy Fairaway as Eva’s daughter, Ellen; Tavi Gevenson as Ellen’s friend, Chloe; and Toni Collette and Ben Falcone as Sarah and Will, a couple wrestling with themselves and  their disaffected housekeeper.

What makes it work is the complexity of the characters and their ability to withstand the pain of their situation. When Gandolfini proclaims that his heart has been broken we feel his angst.

Holofcener creates intriguing people in her films and she gets better and better with each successive work. Enough said, go see it already. I guarantee you will be pleased.