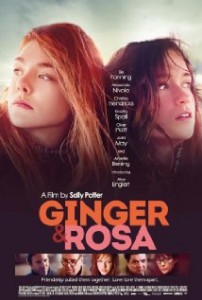 Director Sally Potter (“Orlando”) makes an emotionally engaging coming of age story about two babies being born in London in the same fateful year of 1945. Advance 17 years to 1962, when Ginger (Elle Fanning) and Rosa (Alicia Englert, daughter of Jane Campion) best friends since childhood are living in the shadow of the Cold War and the Cuban Missile Crisis. The girls are growing up and begin to explore the world around them. Ginger, taking a cue from her pacifist writer father, Roland, (Alessandro Nivola) throws herself into the protest movement. Her best friend, Rosa, secretly begins an affair with Ginger’s father who is in a failing marriage with wife Nat (Christina Hendricks).

Potter puts the girls through a series of amusing situations. The one that is most poignant is when Ginger stumbles upon evidence that her dad and Rosa are being intimate. The production values are first rate and Robbie Ryan’s lensing is superlative. On the weak side, some of the more interesting subplots such as Ginger’s interest in a fellow protester seem to reach dead ends when their development could have added a little more complexity to the story. But what makes this film worth seeing is the spectacular performance from Elle Fanning. She is able to express despair, amusement, abandon, existentialism, and spiritual growth with an honesty which is remarkable for such a young actress.