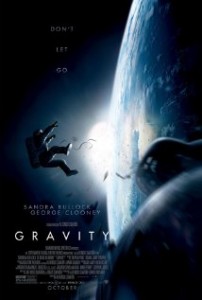 Director Alfonso Cuaron (“Children of Men”, “Y Tu Mama Tambien”, “Harry Potter and the Prisoner of Azkaban”) has created an immersive 3-D space adventure which is a wonder to behold.

Cuaron,  a master of the realist style of shooting and editing known as mise en scene,  has co-written with his son Jonas a tale of two astronauts (masterfully realized by “A” list actors Sandra Bullock and George Clooney) having extreme difficulties in space and struggling to get back  to Earth.

But there is also a third character in the film according to Cuaron, though its subtlety might escape you at first. “The camera is neither an objective observer nor Sandra’s subjective POV-the camera is a third astronaut, and the astronaut is the audience”.  Cuaron continues: “The audience is floating in space, following these characters who are bonded by the loss of physics in zero gravity, floating and rolling and spinning.  The idea is to immerse the audience so that your emotional experience is projected onto the screen in a primal way”. And as an aesthetic work of art “Gravity” is the closest most of us will ever come to escaping Newton’s law and seizing the intensity of a space dream.

The two astronauts, George Clooney’s Matt Kowalski and Sandra Bullock’s Dr. Ryan Stone are adrift in space after disaster strikes during a shuttle mission to repair the Hubble Telescope. Attached to one another they tumble wildly trying all the while to conserve the precious oxygen that fuels their brains. He is a veteran pilot and she is a medical engineer and a novice in space. We are emotionally transfixed by their dilemma and feel their delicate dance of life which might end at any moment.

While story is not its strongest suit, I recommend you go for the ride. Just realize that master director Cuaron, the brilliant DP Emmanuel Lubezki and visual effects supervisor Tim Webber have put four long, hard years into making this 90 minutes the most memorable since Stanley Kubrick’s “2001: A Space Odyssey”.