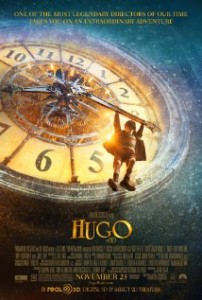 Director Martin Scorsese’s beautiful 3-D adaptation of an imaginative children’s book is a triumph of filmmaking excellence in almost every sense.  Its mastery of the newly digital 3-D medium even excels Avatar.  The film tells the story of 12 year old Hugo Cabret (Asa Butterfield), who lives a secret life within the walls of a 1930s Paris train station. Into the story a wonderful homage to French film pioneer George Melies (an elegantly nuanced Ben Kingsley), who formed the first film studio in 1896, and, directed the first sci-fi film in 1902 called a “Trip to the Moon”, is developed.  When we first come upon Melies he is selling toys in the Gare Montparnesse having lost everything to bad decisions in the fledgling cutthroat film business.

For about half the film, however, we are unaware of the toy seller’s identity, leaving us to concentrate on the trying circumstances of our youthful protagonist as he struggles for survival.  The acting is wooden at times and the action moves in fits and starts but the set design of clock mechanisms by Dante Ferretti grabs our imagination and is nothing short of remarkable. Sacha Baron Cohen plays the ruthless inspector determined to keep the station free of petty thieving orphans, yet visibly in love with Lisette (Emily Mortimer) a flower seller.

The source material is a graphic novel by Brian Selznick (a cousin of Hollywood mogul David O. Selznick).   John Logan did the screen adaptation and “the visual approach centered initially around Brian’s illustrations, the depth of which begged for provocative translation, and 3-D provided that for us” related legendary DP Robert Richardson, ASC,  in the latest issue of American Cinematographer magazine.

In the second half of the film everything clicks as Isabelle (an engaging and fascinating Chloe Moretz) becomes Hugo’s best friend and brings the grumpy old toy seller out of his cocoon and reintroduces us to Melies’  life and art. Scorsese, the film professor, brings to fruition the brilliance of Melies’ early films in a tour de force of visual virtuosity.  This is a must see film in a 3 D theater!