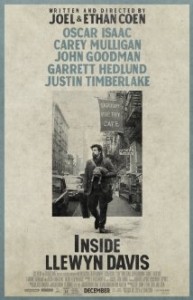 If you love the Coen Brothers, don’t see this movie. You do not want to go inside Llewyn Davis.

After all that Llewyn Davis (Oscar Isaac) goes through in this tale of failure, he finally screams out, “I f—in’ hate folk music!”

So do I after seeing this movie.

Is there really much interest in the beginnings of folk music among the movie-going public under 65 years old? And even with the audience packed with folk-loving, nostalgia-loving Greenwich Village proto-hippies, the Coen Brothers insist on alienating that core audience with disgraceful representations of all of the characters – especially Llewyn Davis.

Its 1961 and Llewyn has scored a gig at the Gaslight Café. He had a so-so career with another singer/musician but that must have ended badly since Llewyn is having a very hard time as a solo artist. His manager is a crappy, crabby, old mean Jew. And his ancient secretary is even worse. In fact, all the Jews – and the film is populated with them – are Nazi-propaganda Jews.

There I said it. See the movie and tell me I have misrepresented the Jewish characters.

Llewyn had a one-off success as part of a folk duo Timlin & Davis. Timlin jumped off the George Washington Bridge (God, how I hated the constant GWB traffic! Imagine what it was like when someone jumped off it!) Why did Timlin jump?

Now there is the interesting story that was summarily dismissed with one obtuse remark. “He jumped off the George Washington Bridge.” End of better story #1.

Llewyn has no income to speak of. His possessions are his guitar and whatever he has in his backpack. He is a couch-surfer. He’s the friend you don’t want to hear from and can’t get rid of.

Llewyn chronically and habitually abuses everyone in his orbit. He crashes frequently at the large apartment of Columbia professor Mitch Gorfein (Ethan Phillips) and his wife Lillian (Robin Bartlett), who suffer his verbal assaults because he was their son’s musical partner. They always have colleagues for dinner and Llewyn continually mocks them without provocation. The Gorfeins are a genuinely loving, forgiving and understanding stereotypical intellectual Jews.

The only character missing from this movie is a money lender with a prominent nose.

Llewyn thanks the Gorfein’s for their all-to-frequent hospitality by letting their cat escape. A cat whose name Llewyn has never bothered to learn.

Then there is his best friend Jim’s (Justin Timberlake) foul-mouth wife Jean (Carey Mulligan). He often sleeps on their sofa and they had sex. Jean takes absolutely no responsibility for this and blames Llewyn when she gets pregnant. Jean, not on birth control, should have noticed how the sex began without a condom or where it concluded. Jean is an angry, bitter folk singer who viciously attacks Llewyn. But why is she so miserable? Jim is so much a puppy begging for attention.

When Llewyn sees his go-to abortionist, he is told he has a 3 year old son. End of better story #2 that should have been told. So off he goes on a road trip with another crabby, old and this time the Coens added crippled to the character (John Goodman) and his steely driver/caretaker (Garrett Hedlund). Not only is this man offensive, he keeps hitting Llewyn with his cane. Llewyn could stop to see his ex-girlfriend and son along the way since he is driving the car with two sleeping passengers, but he doesn’t bother. End of better story #3.

They get into an accident on the road and Llewyn stays true to his character.

By now, you want Llewyn to head on foot for any bridge.

Instead, Llewyn hitchhikes to the famous Gate of Horn to ask the manager Bud Grossman (F. Murray Abraham) if he has heard the tape he sent. Grossman tells him to play right now and then gives him a brutally honest evaluation.

Is there anything else that makes this movie so un-watchable? Yes, absolutely! There is way, way too much singing! With our present musical environment filled with sex-pumping rhythms, the lone voice with guitar accompaniment seems quaint and shopworn. Where was the producer and backing vocals? I know one thing for sure, you can’t dance to folk music.

The Gaslight is now a tattoo parlor. See what I mean? The times they are a changing.

After his road trip and attempt to sign up as a merchant marine fails, Llewyn returns to the Gaslight to play for tips. Who will he follow? Someone on the stage who looks like Bob Dylan.

All the actors are fine and Issac plays this part without playing an intentional bastard. Llewyn is who he is. He has no redeeming traits. Not that I want him to volunteer at a soup kitchen, but he is a man not grateful or insightful about his attitude towards people.

Thank goodness Llewyn’s attack on a sweet lady’s song at the Gaslight’s “anyone can come up and sing night” is appropriately handled.

I’d like to single out Justin Timberlake, who really desires to act. He’ll take any part and play any role. Timberlake does star in movies (RUNNER, RUNNER and IN TIME), but he will play small roles. Being he is a superstar singer, that is impressive. It’s the way Madonna should have went. She should have acted in small roles in for prestigious directors and learned how to play real people. Or, with her money, she could have brought her way into movies. Now, she cannot play sexy parts – we all know how old she is. Her dream of being a movie star has passed. Unless Quentin Tarantino uses her.

Victoria Alexander All Access Granted, a new weekly column, begins January 6, 2014 on Las Vegas Informer www.lasvegas.informermg.com/. If you would like to be included on the advance private distribution list for a weekly preview, just send an email to masauu@aol.com.