A boring, editing mess with an absurd jump cut in the action not worthy of a major hoped-for franchise.

You will know the sloppy editing when you see it. You will say: “What happened?” 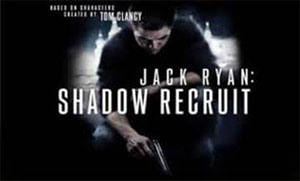 And what’s up with the director, Kenneth Branagh, as Russian villain Viktor Cherevin, giving himself two memorable scenes: seduction and then torture?

While Pine does have a natural charisma and appeal that comes through no matter what, his director did him no favors. There are no movie star close-ups or the appropriate Tom Cruise/Daniel Craig set-ups that make a male actor into a superstar sex image.  In Pine’s case, there are several downright unattractive shots of his acne-scarred, then puffy, face.

Memo to young actors: Never have your director, who was once a romantic leading man, direct you and act in your movie. He resents your taking his rightful place as star.

I know. Branagh directed THOR but he wasn’t playing Loki. And no one puts mighty, cape-wearing Thor in the corner.

Then there is former romantic leading man Kevin Costner, who, for some unknown, tries scene-stealing through grimaces and ticks. Dude, you’ve got the franchise as Jack Ryan’s “M”! Relax and stop making faces. 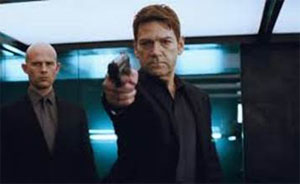 No one in America wants to be in the CIA, least of all, economics student/injured hero marine, Jack Ryan. He gives CIA’s top recruiter William Harper (Kevin Costner) a litany of every nasty thing the CIA has done. Harper’s reply: “Not my job.” Furthermore, Ryan is just an analyst.

So the first half is all about setting Ryan up as an operative-without-training and it’s a bore. His girlfriend, Dr. Cathy Muller (Keira Knightley), will not marry him because he’s just an analyst and not sexy or tall or blue-eyed.

The intrigue here is that Russia plans to devalue the U.S. dollar and destroy the world’s economy. As if the U.S. economy was not already in free fall. Ryan figured it out so he’s sent to Moscow to talk about those secret dollar grabs with Cherevin, the architect of the nefarious electronic money-moving scheme.

Cherevin’s office is designed to cause a brain seizure.

Ryan’s assigned Russian bodyguard, currently on CBS as Dracula’s Renfield (Nonso Anozie), is the first killer he faces and we see how a few weeks at “The Farm” are not enough. Shame on you, William Harper, to allow your shadow recruit to walk around with a gun. What about “intel” on the Russian bodyguard?

Thank goodness there is a lot of porcelain and marble in a luxury suite’s bathroom – just like there was in a CASINO ROYALE bathroom.

While at first Ryan thinks he is alone, he has Harper and an entire tech/hacker staff watching every move he makes, anticipating every move he will make, and telling him what to do at every turn through an earpiece. Harper’s team can monitor Moscow traffic lights and, like Target’s hackers, access Cherevin’s ATM withdrawals.

Ryan took a vow never to tell anyone what he does, so when Cathy catches him in a lie and he can’t account for his whereabouts, she gets on a plane to Moscow. Thank God the rest of the movie is not about Ryan getting calls from Cathy asking where he is, who he is with, and when will he be home. In the Moscow suite, he tells her he works for the CIA.

Cathy should be the shadow recruit. How did she get into Ryan’s room?

And why, as a member of Russia’s oligarchy, is Cherevin overwhelmed with the beauty of an American waif? Cherevin seems to grasp for air in Cathy’s company as they dine in one of Moscow’s most exclusive restaurant. Cathy’s role is now to entrance Cherevin while Ryan downloads secret accounts. Yet, in a public place, she willingly leaves with Cherevin. Why not just refuse to get up and cause a scene? 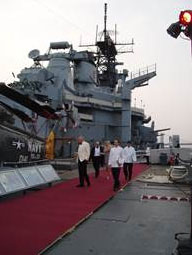 Tom Clancy, a cherished friend of ours, passed away in October of last year. He wrote the forward to my husband’s book, Future War. He graciously signed too many copies of his books for our friends. We were among the 125 guests invited by Tom’s gorgeous, vivacious wife Alexandra to celebrate Tom’s 60th birthday black tie gala in 2007 aboard the Battleship New Jersey. (Tom’s in white, Alex is wearing a gold cocktail dress)

During one visit to Tom’s house overlooking Chesapeake Bay, I asked him about the recent casting of Ben Affleck as Ryan in THE SUM OF ALL FEARS (2002) succeeding Harrison Ford in CLEAR AND PRESENT DANGER (1994) and PATRIOT GAMES (1992). Tom talked about how charmed he was by Affleck who took the pilgrimage to the Clancy compound and brought along Gwyneth Paltrow. Perhaps Ben knew Tom had casting approval and his firm edict about who he would allow to play his most famous character.

JACK RYAN: SHADOW RECRUIT is not an adaptation of a Tom Clancy novel – perhaps it should have been.

The blame for the lack of plot – call it the “shadow plot” – goes to screenwriters Adam Cozad and David Koepp. The lack of sexiness, thrills, and allowing preposterous scenarios lands at the feet of the director. There is nothing new here and that is the biggest surprise.

If there is a franchise in the making, Paramount needs to bring in fresh writing blood and a director who wants to direct not act.

For a complete list of Victoria Alexander’s movie reviews on Rotten Tomatoes
go to: http://www.rottentomatoes.com/author/author-3571/