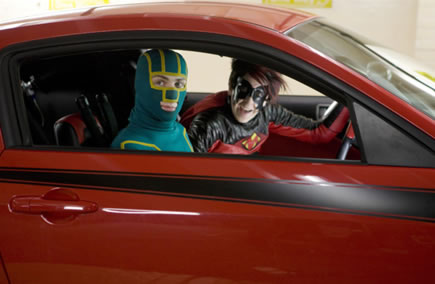 Director Matthew Vaughn’s film is based on the comic by Mark Millar and John S. Romita Jr. and is a witty romp into teenage anarchy. It is stylish, funny and fulfills the visceral sensation that today’s teen craves when assimilating this milieu.

The superhero of the title is the idea of Dave Lizewski (played by Aaron Johnson) who wants the adulation of superhero status. He buys, on the Internet, a superhero style wet suit and goes out into the real world where real criminals beat the shit out of him. But, by accident, in this world of instant celebrity ‘Kick Ass’ becomes a media sensation. In the faux Gotham world of the story there are other superheroes with real powers. Enter Big Daddy (played by Nicholas Cage) and his daughter Hit Girl (played with remarkable gusto by Chloe Grace Moretz) and Kick Ass’ nemesis Red Mist(Christopher Mintz-Plasse). It all plays out in a bombastic sort of way where social networking and building your own website can lead you into living your dreams in the public eye.