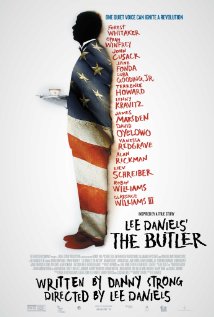 Director Lee Daniels (“Precious”, ‘The Paperboy”) called upon a veritable who’s who of African-American entrepreneurs, a Russian billionaire and an NBA superstar to fund this $30 million dollar historical indie drama about a fictionalized butler named Cecil Gaines(a superb, Forrest Whitaker).  Gaines bears special witness to the tumultuous period in our history known as the civil rights movement.  At times histrionic, and occasionally to on- the-nose The Butler’s 132 minute running time documents White Staff’s under seven presidents by incorporating news clips and fictional recreations. Its importance to African American history can not underestimated and it must be compared to “Roots” as a significant, although slightly flawed, achievement.

Daniels and screenwriter Danny Strong create a sweeping epic beginning in 1926 with young Cecil witnessing the rape of his mother (Mariah Carey) and the murder of his father by a callous white landowner (Alex Pettyfer).  The lady of the manor (Vanessa Redgrave) decides, perhaps as a humanist gesture, to train Cecil as a “house nigger”, a phrasing used during his interview at the White House in 1957.

Cecil soon runs away, landing on his feet at an upscale D.C. hotel and than aces the job which will define his life and this movie.  At 1600 Pennsylvania, Cecil has a humble style which fits in perfectly with the pomp and circumstance.  Lenny Kravitz and Cuba Gooding Jr. play fellow servants and add authenticity to their supporting roles.

What almost sinks this fine film is the stunt casting of   The Presidents.  As Dwight Eisenhower, the great Robin Williams comes up short, James Marsden just doesn’t look enough like JFK, Liev Schreiber’s LBJ feels too much like SNL and the same can be said of John Cussack’s Nixon and Alan Rickman’s Ronald Reagan.  Only Jane Fonda nails her role as Nancy Reagan.

But, what makes Lee Daniels’ The Butler work is its depiction of Cecil and his middle class family. Whittaker plays powerfully off his troubled alcoholic wife Gloria (played incisively by Oprah Winfrey in her strongest film role to date) and David Oyelowo is impressive as the older radicalized son who attends Fisk and becomes a “Freedom Rider”. The film soars at its conclusion as a black man, Barrack Obama, achieves the unthinkable as President.

Finally a word about the title’s pretentiousness, and the story’s provenance. Warner Brothers, some 97 years ago, released a silent film called “The Butler”. Rather than litigate, the title was changed. Also, The Washington Post ran a story by Wil Haygood, in 2008, about a black man named Eugene Allen who served as a White House butler under 8 presidents.