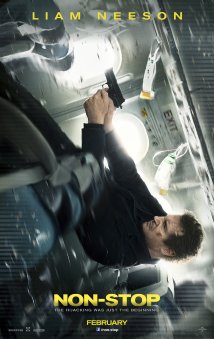 Air travel rules and regulations pushed aside, Leeson is totally committed to the role.

If you count Taiwan, there are 196 countries in the world and I have been to over 50 of them (which includes 15 countries in Africa). Some countries I have been to many times: Peru, Brazil, India, and France, to name just a few. I am highly qualified to review NON-STOP.

I do have a way to go before applying for membership in The Travelers’ Century Club, a social club representing world travelers who have visited 100 or more of the world’s countries and territories. A membership requires an Initiation Fee of $100 per member with yearly dues of $85 ($75 for a spouse) for U.S. residents. What do you get? You get bragging rights.

Have you ever looked over the waiting area at your flight’s gate and accessed the passengers as a group? Is this a “lucky” group or no loss to mankind if the plane crashes?

Bill Marks (Liam Neeson) is a U.S. air marshal who lets us know immediately that he will not be trifled with. He’s a nasty guy. A stranger tries to talk to him and he doesn’t answer. He pushes past a guy on the security line who is busy on his cell phone. He pushes his way through the airport.

Then Bill is on the phone having a nervous breakdown yelling at someone to get him off the flight he has just been assigned. Bill smokes and drinks a lot and carries a gun.

Bill looks at every passenger as a suspect. He can spot every person’s “tell”. That’s his job as a U.S. air marshal.

The first suspicious passenger is Jen (Julianne Moore), who annoys everyone by asking to switch her aisle seat for the much more desirable window seat. It’s a 6 hour flight from New York to London and Jen gets to sit next to Bill. Jen refuses to tell him anything aboutherself.They are in business class. I usually travel coach and always find myself in the middle seat, especially on flights over 12 hours long.

I have traveled in business class a few times and there is absolutely nothing like it. The food is different and never stops. You can drink as many Bloody Mary’s as you want. You’ve got room, a gift bag, and a big blanket.

Bill seems to hate to fly – as least he gets visibly shaken at take-off. He must know pilots are usually lousy at take-off.

No movie ever set on a plane is realistic. It’s damn noisy! The engines are loud. Also, unlike real plane flights, the people in coach on Bill’s flight are well behaved, there is nothing on the floor, and no line to use the toilet. There is no screaming babies.

Screaming babies and obese passengers only travel if seats are available next to me.

There is another U.S. air marshal on board. The crew is well aware of Bill’s drinking on the job and his emotional problems.

Since 9/11 we all know certain things about air travel. The first rule of air travel is: Never use the words “bomb” or “hijack” or look homeless. Would you have gotten on the plane if you saw Richard Reid on line? We also know that once onboard, any unruly behavior, or nasty comments to the crew can mean the plane is turned around.

That one man, Richard Reid, has made tens of millions of passengers all over the world remove their shoes since he boarded a flight on December 22, 2001! That means even my high-heeled, lace-up boots must be removed. Yes, I could arrive wearing flip-flops, but I will not allow one idiot to dictate my footwear!

So when Bill gets texts on his secure cell phone from a passenger who is observing everything he does, and says he will kill someone on board every 20 minutes until he’s paid $150 million, what does Bill do? Follow protocol?

Apparently, 40,000 feet is a magic number in air flight. Nothing can be done but go ahead. There is no landing when going over an ocean.

If protocol was followed, there wouldn’t be a movie, so we will ignore reality and watch the tensed-up Bill deal with a clever and dangerous passenger. The reasons why the plane is not immediately turned around or lands at the nearest airport are explained, but are unrealistic and unsatisfactory.

So a man does die within 20 minutes in an extremely clever way. And from there, even if nonsensical, it’s fun. Especially since Neeson takes to his emotional wreck of the character to heart. The director Jaume Collet-Serra, who worked with Neeson on UNKNOWN, is a Spanish director who clearly does not pander to movie stars.Neeson looks totally in need of sleep, food, a high dose of Valium, and a comb. He looks even older than his age.

Finally, when news filters through the cabin that the captain (Linus Roache) has died, the passive, well-behaved passengers, led by a New York cop (Corey Stoll), starts a mini-combat force and Bill the one who is attacked.

Bill has to explain what is happening and tries to find out which passenger is sending him constant texts with the aid of annoying Jen and flight attendant Nancy (Michelle Dockery).

Of course, there is a black flight attendant (the newest Hollywood It Girl Lupita Nyong’o) but no gay attendant, an Arab (Omar Metwally) that everyone finds immediately suspicious, a nerd (Scott McNairy), a war veteran (Corey Hawkins), and the requisite young girl (Quinn McColgan) flying solo.

If I was in Bill’s situation, after telling the passengers about the texts, I would have told everyone to watch the person next to them very carefully.

How the texts were sent without anyone seeing anything is never explained, or how the genius behind this plot got all the secure information or how the $150 million was to be collected after being sent to Bill’s Swiss bank account.

The screenwriters, John W. Richardson, Christopher Roach and Ryan Engle certainly were aware of the flight rules and regulations but had to make movie adjustments. If movies were based on reality, movie cops would have to account for every bullet and be shown doing tons of life-killing paperwork. The screenwriters do give Neeson a terrific scene where he makes an emotional confession to the passengers.

It’s a shame there are no ballsy female characters for older actresses but the new direction for Neeson’s career, begun with TAKEN, is well served here. He is always fun to watch and has an intensity that movie audiences love. He’s always committed.

*Reid was on a Paris to Miami flight and waited until after meal service to try and set off his shoe bomb. Several passengers worked together to subdue the 6 foot 4 inch tall, 200+ pound) Reid. They restrained him using plastic handcuffs, seatbelt extensions, leather waist belts, and headphone cords. A physician on board administered a tranquilizer to him which he found in the emergency medical kit of the airliner. This flight was immediately diverted to Logan International Airport in Boston, the closest US airport.

Victoria Alexander lives in Las Vegas, Nevada and answers every email at masauu@aol.com