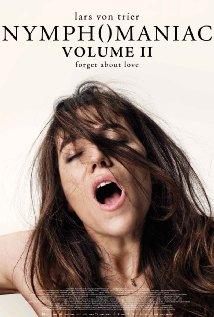 Brilliant, strange, provocative and unsettling. All the characters are just aspects of von Trier – so is the audience.

NYMPHOMANIAC: Vol II takes places at exactly the moment Vol. I leaves off. Joe (Charlotte Gainsbourg, in her third von Trier film)continues to tell to Seligman (Stellan Skarsgård, who has been in six von Trier’s films) the story of her sex life.

Joe is now a decade or so older and is living with Jerôme (Shia LaBeouf) and their son Marcel. Being a mother does not satisfy Joe. She wonders if the baby even likes her or if she likes him.

When he was an adult, von Trier’s mother revealed on her deathbed that the man who he thought was his father was not. When he finally met his ‘real’ father, he didn’t like him at all. The father didn’t like him either. They met in an office. “He said that he thought my mother ‘protected’ herself. Secondly, he said, ‘I never accepted that child’. And in the end, he said any connection should go through his lawyer.”

Along with no feelings of maternal love, Joe has lost all sexual sensation. Jerôme realizes he is not satisfying Joe so he suggests she explore other men to re-ignite her passion.

And so Joe proceeds hunting sexual pleasure. The women at her job complain about her overt sexual behavior in the workplace and Joe agrees that every man – married or not – is prey to satisfy her sexual appetite. She is told this behavior will not be tolerated any place.

Joe thinks if she were to be purely a sexual object may arouse feelings in her. She arranges for two young, non-English speaking African immigrants to have sex with her.

She has not achieved orgasm. Joe is having lots of “nil sex”.

Joe finally finds K’s (Jamie Bell) waiting room. She has heard about him. Other women are waiting their turn but they have their eyes downcast and all appear to be ashamed to be there. No one is talking. K is a master sadist.

This section of the movie is shocking, provocative and astonishing in the depth of detail provided. This is the master class of S&M.

I now have respect for Bell as an actor and will never think of him again as a ballet dancer. Here he is chilling and very, very scary. He’s believable. This role is so different from anything he has ever done, that it could be a turning point in his film career. Of course, Bell’s new TV series, Turn, returns him to a middling, uninteresting career.

These scenes between Joe and K are unsettling and haunting. Do not believe what you may have read elsewhere – unless you are incapable of any sexual arousal – these scenes are very, very strong. You cannot dismiss them. They will not bore you.

Through the bondage and cruel whippings (K tells her there is no “safe word”), Joe experiences intense sexual release. It is so intoxicating that she goes to K’s vault every night. Joe receives a Christmas present from K – her own rough cord whip. K gives her the Roman whipping given to Jesus: 40 cruel, vicious, flesh cutting lashings.

One night the babysitter fails to arrive and Joe leaves Marcel alone. Jerôme is outraged that Marcel could have injured himself and tells Joe if she leaves again, she will never see him and Marcel again.

Joe cannot give up K and walks out on Jerôme and Marcel.

Seligman tells Joe he is a virgin. His knowledge of life experiences have come from books. He lives a bare existence. Like the character of Joe, Seligman is a stand-in for von Trier.

“Basically, I’m afraid of everything in life, except filmmaking.” Lars von Trier

Joe finally finds work as an enforcer for L (Willem Dafoe – who starred in von Trier’s ANTICHRIST with Gainsbourg). Joe is very good at getting debtors to pay up. After a few years of impressive success, L encourages Joe to take on a protégé. L has researched the candidates and has found lonely teenager P (Mia Goth). L tells Joe to instigate herself into P’s life and win her love and devotion. In time, L tells Joe, she can retire and have P work for her. And, if necessary, take every risk and consequence.

Joe and P have an intense relationship that erupts when one of L’s debtors happens to be Jerôme (Michael Pas).

Von Trier has said this about his mother’s revelation about the identity of his biological father: “Fucking bitch. Yeah, OK. I am quite negative towards her, and the father who is not my father has a god-like status for me.”

Von Trier is definitely not ashamed of publicly expressing his feelings for his mother. Was he left alone? Was his mother indifferent to him? Did his parents, who were avowed nudists, make him physically nervous?

Von Trier makes the audience uncomfortable watching all the nudity and explicit sex in NYMPHOMANIAC: Vol. I and II. Perhaps he was uncomfortable when his parents indulged in their nudist lifestyle and took him to nudist camps when he was a boy.

If Seligman and Joe are just aspects of von Trier – so are we.

It’s quite clear to me the intense drama that von Trier is re-living through his films. Both ANTICHRIST and NYMPHOMANIAC: Vol II have the same theme of maternal rejection. The theme – Mother is Dangerous. This is the troubling psychological trauma that von Trier is working through. A parent’s insensitivity and indifference can be devastating to a young child.

If one looks at NYMPHOMANIAC as a confessional by von Trier, it is not misogynistic.

“I don’t think he’ll ask me again, though. After three times, I think he knows everything about me.” Charlotte Gainsbourg

Gainsbourg is a revelation and has given her soul to Joe.

NYMPHOMANIAC VOLUME II is immediately available via VOD at FlixFling (https://www.flixfling.com/) for $9.99. Do not miss it!