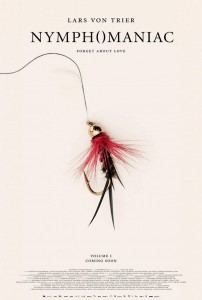 I’m strongly biased. I’m a huge fan of provocative filmmaker Lars von Trier ever since BREAKING THE WAVES (1996). Like the most recent intense verbal war between stars Léa Seydoux and Adèle Exarchopoulos and director Abdellatif Kechiche the director of their Palme d’Or winning film, BLUE IS THE WARMEST COLOR (my Best Actress choice for 2012 was Exarchopoulos), working with von Tier has taken its toll on actresses.

After starring in von Trier’s DANCER IN THE DARK (2000) star Björk vowed never to make another film. She even wrote a letter to Nicole Kidman telling her not to work with von Trier in DOGVILLE (2003) because “he would eat her soul.” Yet, NYMPHOMANIAC VOLUME I and VOLUME II is Charlotte Gainsbourg’s third film for von Trier.

In an interview, Björk labeled von Trier a “woman-hating “soul robber”. Clearly, Gainsbourg either has the soul-robbing vaccine or she is soulless. Although, Gainsbourg has said she wants to continue making films with von Trier but thinks NYMPHOMANIAC will be her last. “I don’t think he’ll ask me again, though,” she said. “After three times, I think he knows everything about me.”

Like von Trier’s “I am a Nazi” comments at a 2011 Cannes Film Festival press conference for MELANCHOLIA, causing him to be banned for life from the festival, NYMPHOMANIAC star Shia LaBeouf caused a media circus when he walked the red carpet and posed for photographers at the International Film Festival Berlinale with a paper bag over his head that said, “I am not famous anymore”.

For all the early reports that the stars would actually be authentically having sex on film, now we learn from everyone involved that every actress and actor had stunt doubles—porn actors—to perform the sex scenes in the film.

I consider von Trier’s work brilliant because few directors make films that are so revealing about themselves. This is, of course, a von Trier film. It is not a Tom Cruise film or a Charlotte Gainsbourg film. All the actresses in von Trier’s films are playing versions of himself. He exposes no one but himself. He is the one who is psychologically naked and very few of us want.

Here is one example I like to use: In Ridley Scott’s BLADE RUNNER (1982) replicant Roy Batty confronts his maker Dr. Eldon Tyrell in his ornate bedroom. This is an intensely dramatic scene. Roy pleads for more life, presents his achievements, cries, and, holding Tyrell’s head close to him, puts his creator’s eyes out, killing him. In Scott’s GLADIATOR (2000), Commodus has an equally emotional scene in his father’s ornate bedroom. He pleads, presents his achievements, cries, and then smothers him with a pillow.

Continuing the theme, there is a scene in PROMETHEUS (2012) between Vickers and her father Peter Weyland. Vickers is kneeling in front of him telling him, essentially, his time to die has come. Later, Fifield asks Elisabeth Shaw, “Doesn’t everyone want their parents to die?”

So, one could assume, Scott is working something out. He’s got a daddy-issue.

NYMPHOMANIAC VOLUME I is the story of Joe (Charlotte Gainsbourg), who is found by an older man, Seligman (Stellan Skarsgard), injured and lying in the middle of an alley. Refusing his offer to take her to a hospital, she goes to his apartment. He gives her a small bed to rest on and makes her tea. He asks her what happened and she begins to tell the story of her life.

Joe tells him she is now a self-loathing nymphomaniac. Originally, she was a happy-go-lucky nymphomaniac, but something horrible must have changed her perspective. Is he sure he wants to hear the story of her self-analyzed affliction?

Did Joe google the word or look up the symptoms in the Diagnostic and Statistical Manual of Mental Disorders (current version is the DSM-5)?

Anyhow, Joe begins her sexual awakening as a teenager (Stacy Martin). Her friend (Sophie Kennedy Clark) challenges her with the reward of a bag of sweets. Whoever has sex with the most men on a train wins. They choose a train with the longest route so there is a lot of competition. Soon both girls are racking up points.

Joe realizes her power over men, even a faithful man coming home to impregnate the wife he loves.

Seligman encourages Joe by seeming completely unaffected by her descriptive sex escapades. In fact, he relates it to the impossibly unsexual art of fly-fishing and Fibonacci numbers. (I’ll leave the comparison to Seligman, though I will say I know a lot about fly-fishing and how sex relates to numbers. I think it might be a leap.)

Seligman’s attitude of non-judgment – in fact, he sees the beauty and skill of her investigative reporting on sex – that Joe continues. Yes, it was a research project and not a condemnation!

While adult Joe tells her story with psychological insight and a brutal evaluation of her sexual promiscuity, teenage Joe is just living her life practicing her art of conquest and her fascination with sex. It’s a life’s work – an art project, and she indulges in it with a variety of men. She has no criteria for her partners. Soon she is racking up appointments, scheduling six to 10 men a day. It is an exhausting workload for a girl working full-time.

There is a great deal of nudity by young Joe (Stacy Martin). It reminds me of the famous response made by Harvey Keitel about his full-frontal nudity onscreen in several films at the time of the interview (BAD LIEUTENANT, THE PIANO, ULYSSES’ GAZE): “I’ve done no nudity in my career. An actor doesn’t do nude scenes. An actor plays an event and tells a story.”

Shia LaBeouf was smart to sign on for a von Trier film. He needed a daring work to erase his four TRANSFORMERS and the one that killed a potential franchise, INDIANA JONES AND THE KINGDOM OF THE CRYSTAL.

He is absolutely terrific as Jerome and delivers a strong sexual presence. Von Trier is not known for writing or favoring male characters and they are usually just set pieces, but LaBeouf’s untapped-until-now charisma comes through.

What is so riveting about NYMPHOMANIAC VOLUME I is how revealing it is about a woman’s sexual life and her feelings about men. There was not one contrived moment. Joe’s only vulnerability is Jerome and it will be fascinating as to how their story continues in VOLUME II. Seligman’s relationship with Joe, how she came to be beaten up and left, and why she is called “Joe”.

I know it is far too early, but I put Uma Thurman’s name on my 2014 list as Best Supporting Actress.

While NYMPHOMANIAC VOLUME I will be shown in art house theaters around the country, probably not here in Las Vegas, it is immediately available via VOD. I signed up for FlixFling (https://www.flixfling.com/) and watched it for $9.99.